Supreme Court to continue hearing plea seeking implementation of "One Rank One Pension" in Defense Forces. 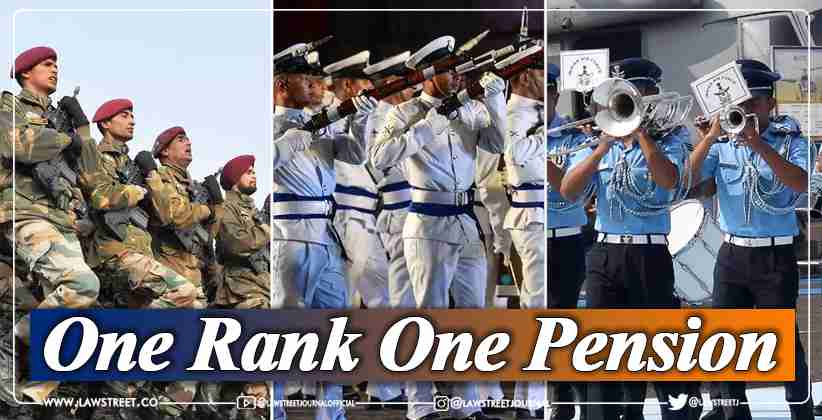 Plea avers that despite assurance on floor of Parliament, what is being implemented is "diff pensions for same rank” depending on when the person retired

ASG Venkataraman to continue with his submissions

ASG: Please take the comprehensive affidavit we had filed. They have raised 3 contentions- we'll deal with all 3:
It should be automatic & not periodical
Review once in 5 years is not acceptable

ASG: 3rd is one chart which im going to show & you should take the highest of the scale & not go by mean.

DYC J: You've taken the mean but nobody is brought down.

ASG: Yes none is brought down.

ASG refers the chart wherein comparison has been made b/w the pension of sepoys who retired after 2015 & before 2015.

Nath J: Suppose somebody retired in 1990 & the ACP came in 2006, the rank will still remain but he will get the diff pay scale. Because your is twin condition: same rank & same service.

ASG: Yes but don't bring MACP into it. My friends are comparing MACP with non MACP.

DYC J: Acc to them is that you're giving MACP retrospectively from 2006.

DYC J: Acc to you the perfect mathematical equality cannot be achieved?

ASG: The 3rd eg which is at page 80- someone who is not qualified is being compared.

ASG: 3rd comparison is not being comparable at all.

Nath J: Your OROP will not be applicable to soldiers retiring after 2014?

ASG: Its upto a grade. It goes on.... Let me take instructions.

Nath J: Notification says the it applies to employees retiring 1.7.2014.

ASG: Please take my friend's reply on this 3. Whatever we have put on record has not been denied. Please look at para 17.

ASG: They want MACP to be badged with non MACP & get the same scale.
Within the same rank the pay scale because of MACP may vary but he retains the same designation.

ASG: Our court has said that people may draw diff salaries but having the same rank because of MACP. Now my friend says match me with Naik for OROP. Non MACP Sepoy & MACP sepoy & asking them to match with MACP is claiming to get higher.

ASG: To say for pension you'll be diff & for OROP will be diff is not right...

Nath J: But after 2006 he would not be retiring not at the same scale pay but a diff scale pay..

ASG: If someone who has qualified for MACP in their regular service.

Kant J: Under MACP what is the approx percentage who have been granted the benefit. MACP is based on length of service. If you have factor of 9 years, 24 years- there will be hardly any person who will serve for 24 years.

ASG: Someone qualifying for MACP & not for MACP is not the subject matter of this writ.

Kant J: Its not within the subject matter but its imp for OROP. if in the cadre of Sepoy 80% of them will get MACP then they will get same OROP. What it appears is that MACP has become barrier for grant of OROP.

DYC J: There also larger number of people will get same MACP because of 8 years.