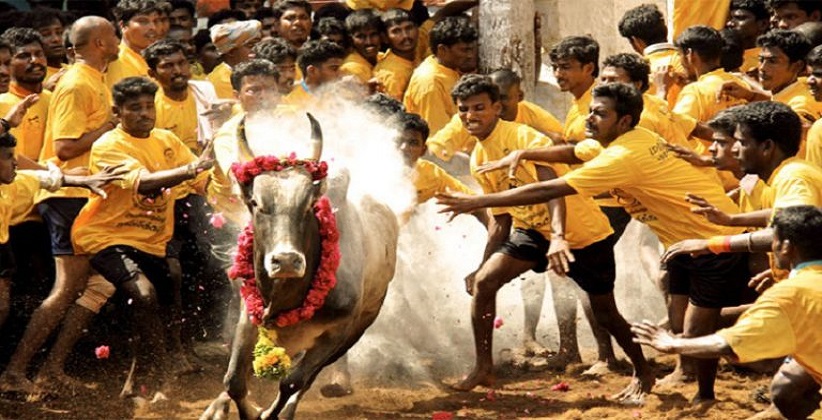 The Supreme Court today referred to a Constitution Bench a batch of petitions challenging the law passed by the Tamil Nadu legislature allowing the sport of Jallikattu.

A Bench comprising of Chief Justice of India Dipak Misra and Justice Rohinton Fali Nariman has framed five questions that will be taken up by the Constitution Bench to decide the issue.

The issue, inter alia, is whether the State can conserve Jallikattu as their cultural right and demand protection under Article 29(1) of the Constitution which states that "any section of the citizens residing in the territory of India or any part thereof having a distinct language, script or culture of its own shall have the right to conserve the same."

The Tamil Nadu legislature has passed The Prevention of Cruelty to Animals (Tamil Nadu Amendment) Act, 2017 which legalizes Jallikattu.

The petitions challenging the sport has been filed by Animal Welfare Board, People for Ethical Treatment of Animals India (PETA), Compassion Unlimited Plus Action (CUPA) and animal rights activist Gauri Maulekhi.

In 2014, in the judgment of Animal Welfare Board of India v. A. Nagaraja, the Supreme Court held Jalikattu as cruelty to bulls and declared the practice as constitutional impermissible.

Crime, Police And Law Aug 31, 2020 M.V. Manasa ( Editor: Ekta Joshi ) 130 Shares
130 Shares
On 25 August 2020, few videos got leaked all over the social media, where a woman named Pooja Dhillon from Lucknow was allegedly seen crushing a puppy under her feet. As the videos got viral on social media, action was taken when Ms. Kamna Pandey lodged an FIR against Pooja Dhillon and her husband Raj Dhillon for the violation of the Animal Rights Act, under Section 429 (Mischief by killing or maiming cattle) of the Indian Penal Code. But later on, the women and her husband were able to secure...
Read full post