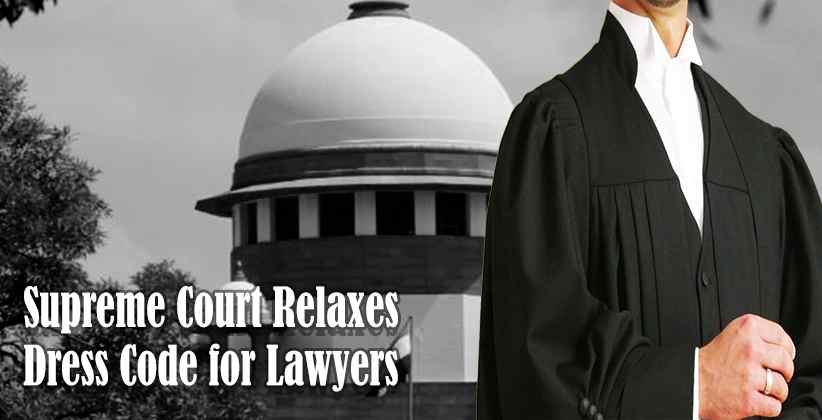 To contain the spread of coronavirus and as a precautionary measure, the Supreme Court recently relaxed the dress code for Advocates appearing before it through video conferencing.

The circular issued by the Secretary-General of the Supreme Court informed that “Advocates may wear ‘plain white-shirt/ white-salwar-kameez/ white saree, with a plain white neckband’ during the hearings before the Supreme Court of India through virtual court system till the medical exigencies exist or until further orders.”

The court has also done away with the requirement of wearing gowns, for the time being, and these directions will come into force with immediate effect.

It was also stated that the apex court will be issuing directions to judges and advocates to appear before the court without robes for now to prevent the spread of COVID-19.

Earlier, senior advocate Kapil Sibal during a hearing had requested to know why the bench comprising of Chief Justice SA Bobde and Justice Indu Malhotra were not following the dress code. The CJI in response had commented that they have heard that jackets and gowns make it easier to catch the virus and therefore an order would be issued soon to alter the dress code for lawyers and judges. This was of utmost significance as the courts are likely to function and hear non-urgent matters per normal soon.

On similar lines, Justice L Nageshwar Rao heading the three-judge bench stated to the Solicitor General - Tushar Mehta that the apex court would be running a pilot measure from the coming week wherein judges would take up cases sitting in the courtrooms and the advocates shall argue the matters sitting in their chambers through video conferencing.