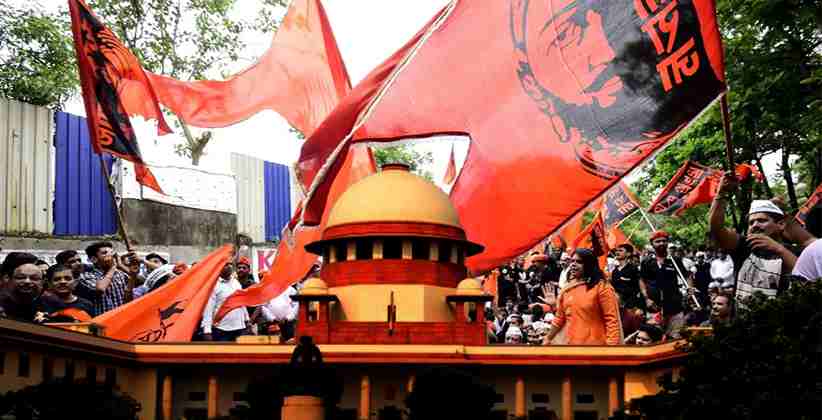 On 15th July 2020, the Supreme court announced that it would commence hearing on pleas challenging the law of Maharashtra which grants reservation to Marathas in education and jobs. The hearing would take place through videoconferencing.

Currently, the court has refused to pass any interim stay order on this quota. The bench comprising of Justices L.N. Rao, Hemant Gupta and S Ravindra Bhatt are adjudicating the matter. It said that the parties should sit together and decide on modalities of hearing, considering factors like the repetition of arguments and time allotted to pleas.

Senior advocate Shyam Divan appearing on behalf of petitioners said that this kind of case should be heard in a physical court and not on a virtual platform.

“If we are constrained, then give us the earliest possible date. There is tremendous urgency in the matter. We may also need to revisit the concept of interlocutory relief”. He also added that there is a large group of postgraduate students whose career is at risk.

Senior Advocate Kapil Sibal said that the issue of a 10% reservation for Economically Weaker Section (EWS) of the society needs to be heard.

In the hearing, it was pointed out that a huge part of the reservation, around 12-13% has been taken away and that the High Court is bound by orders of the Supreme Court. Moreover, it was mentioned that the nine-judge bench had already said that the quota should not exceed 50%. Advocate S.M. Jadhav said that the bench can't look at a compilation of over 1,000 pages.

The Socially and Educationally Backward Classes (SEBC) Act 2018 was enacted to grant reservation to people of the Maratha community in Maharashtra in jobs and admissions. The High Court of Bombay upheld the law in June 2019 but said that 16% was not justifiable and that the quota should not exceed 12% in employment and 13% in admissions.

A plea was filed by MBBS doctors in the apex court which sought a direction that made sure that this law was not applicable on Post Graduate Medical and Dental courses for the academic year 2020-21. However, on 5th February 2020, the court refused to stay the high court order upholding the state with some modifications

In the pleas filed, it has been claimed that this act has breached the 50% ceiling on reservation fixed by the top court in its landmark judgment in the Indira Sawhney case, known as the ‘Mandal verdict’.

It has been alleged that this act was done under “political pressure” in full defiance of constitutional principles. According to constitutional machinery, reservation can be granted only if a particular community is named in the list by the president. The pleas pointed out that the Maharashtra Legislative assembly passed a bill granting 16% reservation to the community

India has seen a trend of vote-bank politics and political appeasement which has resulted in radical changes in the structures of imparting education and employment. The Supreme Court has consistently objected to this trend and has tried to put an upper limit on this issue. But the increasing political mobilization has seen these barriers weaken resulting in-laws which potentially violate the constitutional principles which the Supreme Court needs to take cognizance on.

Supreme Court of IndiaReservation For Marathas