Home Judiciary “We just cant have the society like this”, SC in Bengaluru Riots related hearing
Judiciary

“We just cant have the society like this”, SC in Bengaluru Riots related hearing 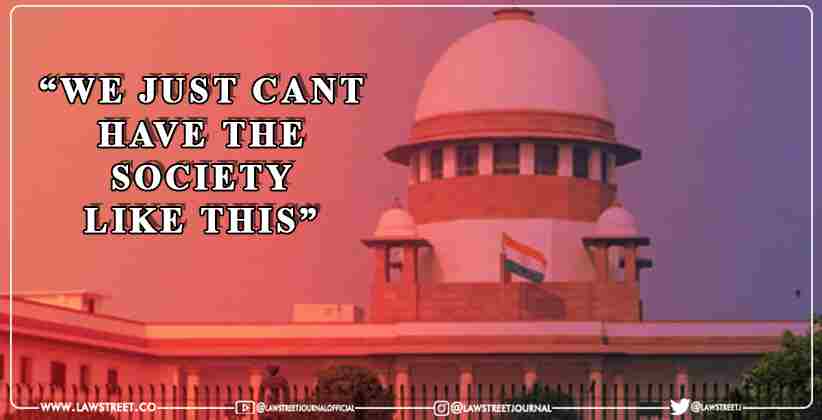 Supreme Court hearing an appeal by 68-year-old retired Govt engineer Mohammed Kaleem Ahmed arrested among 17 other leaders and activists of the Social Democratic Party of India and Popular Front of India, by the National Investigation Agency in connection with the  Bengaluru Riots

Senior Advocate Siddharth Luthra submitted that the Appellant is 68-year-old retired engineer. The issue is where riots took place. There is an FIR registered by the State police. My name come up when the NIA came in play.

I have now spent 14 months in custody, of these months the Chargesheet is still pending. There are 154 witnesses. There is a background to this petition. There is a political cat fight, one Mr Pasha posed a comment against BJP MLA.

Naveen posed certain comments on social media and the whole conspiracy starts from there.

Bench- We have gone through this matter Mr Luthra. The High Court has passed the detailed order. UAPA imposed and apart from it there are Section 352, 323, 333, IPC.

“We just can’t have the society like this,” Supreme Court.

Luthra- I am a retired Govt officer my lord. I was there because I have a pharmaceutical shop there.

Bench- First of all your arguing counsel is disturbing us a lot. First take complete instructions and then argue.

Luthra- There are two transactions which are lumped together. I am in FIR 141, and I am not in 152. FIR mentions Kaleem Pasha, not me. There is no dispute in that.

Bench- Mr Luthra, I didn’t even point out Section 307IPC, I points out to you where is the problem lies. We can’t have a society like this…This is apart from all other there is UAPA, Damages to property…

⁃No 307IPC and no other serious offences as fallen from milord.

⁃Now please see the role attributed to this gentleman. SDPI is the political party and he was associated with it. Reading from the Chargesheet.
⁃There are total of 13 FIRs. Milord will not that there was a Innova Car which will play a important part in the Story NIA.

⁃I wasn’t named in any of the FIR. The person whose vehicle was burnt nothing attributed to me.

Bench- How are you connected with the person?

Luthra- The person who named me first time in the burning of the Vehicle is the policeman from the area, who knows me previously. I wasn’t named earlier in the FIR lodged on the basis of complaint by the brother of the person whose vehicle was burnt.

They could have made me accused in the first FIR.

Bench- Ultimately, where all these arguments take us there? Point is the overall scenario which is unfolding in this present FIR, how can bail be granted under UAPA?

Luthra- they have charged me for rioting under IPC. Then they say burning one vehicle they framed me under the UAPA. Is it a case of UAPA, or under the IPC? Is it a case of law and order or violation of public order? The investigation is completed against me.

It’s only pending against others…Kartar Singh Case squarely covered my case. It’s not a UAPA Case. He has a shop in the place of incident. All the Police statements in first FIR doesn’t named me.

Bench- we have taken note of your submission. Before we say anything, we want to hear other party as-well.

Adv Gaurav Agarwal appearing for 5 other appellants against the order of Karnataka High Court. Points out the investigation is completed against the accused and they are languishing in jail for the last 16 Months.

UAPA invoked because allegation against my clients that they have burnt the bike.
Bench- At this juncture where the trial is not over, we cannot..(discussion among judges)

Bench- At this juncture, we are not inclined to grant any relief. Looking to the overall scenario the bail cannot be granted.

Luthra- Milord decision is affected by the Section 353IPC. But when we look at today there are more than 300 witness to be examined and I m here for person who is 68 year old.

Bench- Sorry! We are not inclined.

Luthra- I would request milord please protect me. The trial cannot begin because of the peculiar situation.
Bench- By this Court declining to grant special leave to appeal, how this in anyway affect you.

Bench- We are not persuaded to interfere in the order by granting leave.