Home Judiciary Supreme Court on Vikas Dubey Case: “Will do something like Telangana”
Judiciary 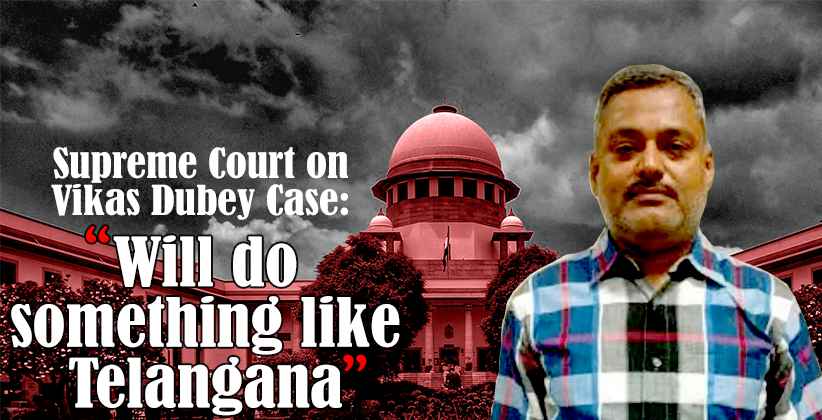 The SC may appoint a panel headed by a retired judge for further probing in the Kanpur Police's killing of UP gangster Vikas Dubey and his aides last week along with his massacre of 8 policemen a few days earlier.

This comes in response to a PIL asking for a Court-monitored CBI or NIA probe into both the incidents. The UP Government has been given time till Thursday (15th July) to tell what kind of committee it wants.

CJI SA Bobde said, “We will do something as we did in the Telangana case. Tell us what kind of committee you want.” The Telangana case referred to here was the encounter killing of 4 men accused of the rape and murder of a 27-year-old woman.

A panel headed by Ex-SC Judge Justice VS Sipurkar was constituted to probe the matter in the Telangana case.

Tushar Mehta, Solicitor General, appearing from the side of the Yogi Adityanath Government asked for some more time to formulate a reply.

Vikas Dubey was the main accused in the attack that left 8 policemen dead and 7 others injured. He was shot dead on Friday (10th July) while he was being brought back to Kanpur from Ujjain after being arrested. He was killed in an encounter as he was trying to escape from the police following a car accident.

As per the statement from the police, Dubey snatched a gun from a policeman. The police attempted to make him surrender but he forced the police to shoot at him after he fired at them.

The credibility of the statement is being doubted and many questions have arisen over the description of events leading to Dubey's death by the police.

An independent 1-member committee has already been appointed by the State Government to probe the incident. It consists of a retired judge and the report must be submitted within 2 months.

The ongoing inquiries into the killing of the 8 policemen have brought forward a deep-rooted network of policemen supporting the gangster. Chaubeypur Police Station's (having jurisdiction over the village) Officer-in-charge was arrested in relation to the case. Additionally, 4 other policemen from the police station have been arrested and as many as 30 are being investigated.

The case will be next heard on 20th July. The petition will be heard by a 3-judge bench including CJI Bobde, Justice R Subhash Reddy, and Justice AS Bopanna.