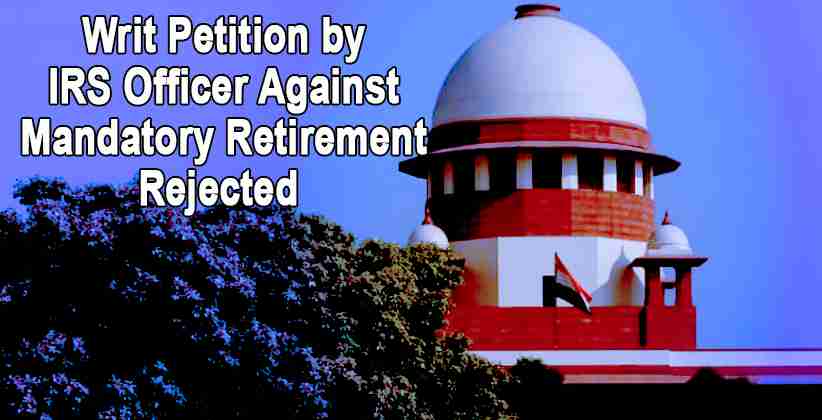 The Supreme Court declined to accept the petition of an official from the Indian Revenue Service, questioning the decision of the government on compulsory retirement.

The court ordered the petitioner to go to seek relief from the Central Administrative Tribunal (CAT).

A bench of Justices Dhananjay Y Chandrachud, Indu Malhotra, and Indira Banerjee agreed with the Centre’s plea that the petitioner Ashok Aggarwal should go to CAT. Aggarwal is among the 27 IRS officers who were compulsorily retired by the Central Government last year.

The apex court also referred to the fact that, prior to the opening of those proceedings, the petitioner Ashok Kumar Aggarwal went to the Delhi High Court where his petition was dismissed on the issue of consideration. In the supreme court, the petitioner then lodged an appeal against the order of the High Court. In this case, on October 21, 2019, the court gave him permission to take alternative steps.

The apex court also took cognizance of the assertion of Solicitor General Tushar Mehta that 64 people have been forcefully retired by the government and some of them have challenged certain orders pending in the CAT.

Coming to the conclusion, the court further stated, “while permitting the withdrawal of the petition, liberty was granted but the grant of liberty would not amount to an adjudication on the maintainability of a petition under Article 32 of the Constitution. The Union of India is within its rights in submitting that the petitioner must seek recourse to the remedy before the CAT. That apart, the Solicitor General has pointed out that as many as sixty-four persons have been compulsorily retired and some of them have challenged similar orders of compulsory retirement and their substantive OAs are pending before the CAT."

The court ordered that, if the petitioner brings the case before the CAT, the petitioner should dispose of it as soon as possible and within four months of the date on which the petition was lodged. Last year, in the wake of charges of corruption, professional misconduct, and bribery, the government mandatorily retired several senior officials of the Indian Revenue Service (Income Tax).