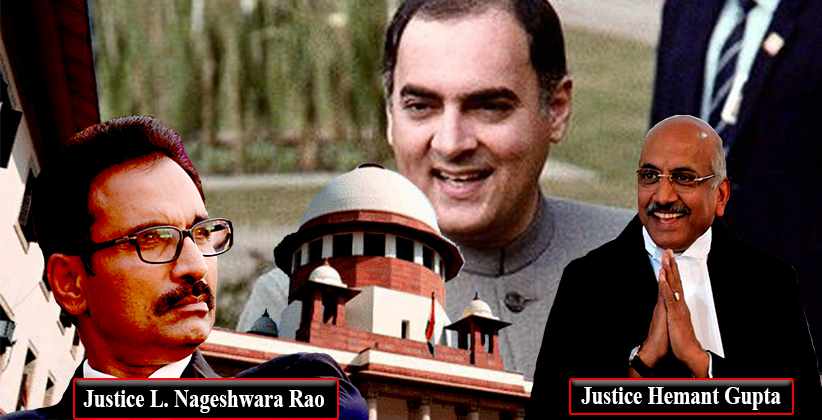 A Supreme Court bench comprising of Justices L. Nageshwara Rao and Hemant Gupta, on 14January, 2020 expressed its discontent on lack of progress made by the Central Bureau of Investigation into the investigation of a larger conspiracy over the assassination of Rajiv Gandhi case.

The former Prime Minister was assassinated at Sriperumbudur in Tamil Nadu in 1991. The bench displayed their dismay at the report and said, “We are not happy with the report”. The matter came back up again after half-an-hour when Jusitce Nageswar with voiced his opinion sternly and said, “There is no difference between this report and the ones filed before. Everything said is quite the same as before... going to Bangkok or something... What we want to know is what progress has been made in the past two years at least”.

Senior advocate Gopal Sankaranarayanan, appearing for Rajiv Gandhi assassination convict A.G. Perarivalan, submitted that the CBI Multi Disciplinary Monitoring Agency (MDMA), probing the larger conspiracy behind the killing, was yet to conclude its investigation relating to the origin and make of the bomb.

Perarivalan was nineteen years old when he was sentenced to life imprisonment and has spend a around twenty five years in jail.  He has sought an order from court to relieve his sentence until the probe by MDMA is concluded. He has contended that CBI has not yet questioned Nixon alias Suren, one among the 21 suspects the CBI wants to investigate. He further said that his role in the alleged crime was of that on supplying two nine-volt batteries without the knowledge of what it is going to be used for.

He argued “Further it is essential to state that D.R. Karthikeyan, who was the head of the Special Investigating Team (SIT) CBI, has made statements that the IED was locally made in Sri Lanka. The internal evidence shows that the nine-volt battery was soldered with the IED. If that being the case then in all chance that it could be said that the alleged nine-volt batteries given by the petitioner was not at all used in the IED”.

Perarivalan said he was a “19-year-old boy when his mother handed over to the CBI and now he is 45 years old, lost all his prime youth in prison that too in death row under solitary confinement for more than 16 years”. He said his “aged mother and father are waiting for their only son to join at least in the last years of their life”.

He pursued an education in prison under harsh circumstances and his health has taken a toll due to the effects of “death row syndrome”.