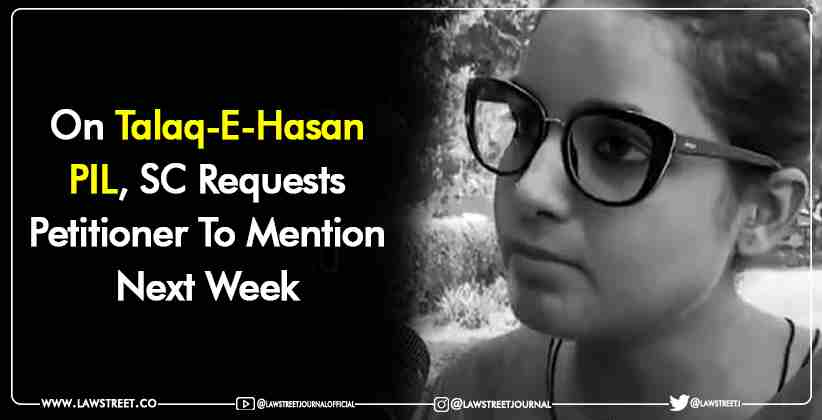 On Wednesday, a petition challenging the Muslim personal law practice of divorce through Talaq-E-Hasan was mentioned before a vacation bench comprising Justices DY Chandrachud and Bela Trivedi of the Apex Court for urgent listing.

Senior Advocate Pinky Anand mentioned the PIL petition filed by journalist Benazeer Heena before a vacation bench, stating that the petitioner has received the second notice of talaq.

According to Talaq-E-Hasan, a Muslim man can divorce his wife by pronouncing 'Talaq' once a month for three months.

"Notices have been issued through the lawyer for Talaq E Hasan. We're challenging the proceedings. First notice was issued on April 19. Now a second notice has been issued."

"The issue  of only Talaq E Biddat was considered in Shayra Bano. Talaq-E-Hasan was left out. We are challenging it."

"There is no urgency. We will keep it on the reopening day after vacations."

"By that time, the third talaq will be given and everything will be over. She has received the second notice on May 19 and on June 20 it will be over"

"There is no urgency in this. You receive the first notice on April 19 and wait for a period to come here."

"By reopening everything will be over. It is about a woman being abused."

"You mention it next week, take your chance then."

Prior to this, on May 9, the Hon'ble CJI N.V. Ramana had refused to grant urgent listing for the plea.

The petitioner argues that the practise of Talaq-E-Hasan is discriminatory. Because only men can exercise the same. PIL seeks a declaration that the practice is unconstitutional as it is arbitrary and violative of Articles 14, 15, 21 and 25 of the Indian Constitution. It is not an essential practice of the Islamic faith, as per the petitioner.