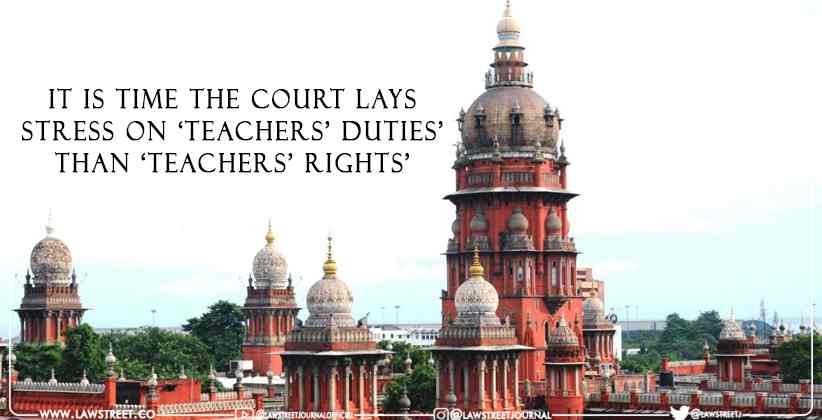 The Court directed the State to investigate and act against teachers taking private tuition classes and to frame guidelines to monitor the conduct of teachers. The Madurai Bench of the Madras High court recently took strong exception to the growing practice of government teachers taking up part-time employment by way of tuition classes or other businesses.

Justice SM Subramaniam remarked that this practice is spreading like cancer as teachers have developed greed for money and the same amounts to misconduct.

“These part-time employment out of tuition classes and business amongst the teachers are spreading like cancer as they develop greediness for the purpose of earning more money. In the event of allowing such misconducts, undoubtedly, the government cannot expect better performance of the duties and devotion to duty from the teachers," the Court said.

Such misconduct has to be viewed seriously in the interest of students and the education system, the court added.

Thus, the Court Suo-Moto impleaded the Principal Secretary to Government, School education Department and the Commissioner of School Education in order to ensure implementation of the directions by the Court passed in this regard,

A government teacher, through a plea to the High Court, was seeking transfer within 30 Kilometer (km) radius of her spouse who was also a government teacher. In her plea the petitioner had challenged an order rejecting this request stating that the decision was against a government order which laid down that the spouses-employed cases are to be considered for transfer within the radius of 30kms. The government advocate informed the Court that the distance between the spouse’s places of work was actually only 18 Kilometers as per satellite map and thus, the request was rejected.

The Single-Judge on hearing the parties disapproved of the practice of public servants claiming ‘transfer as a matter of right’. The judge stated that the Government Order only provides ‘priority’ and ‘does not confer a right’.

The judge further stated that the day to day administration of the government vests with the executive and courts were not expected to interfere with such administration.  It emphasized that a court can only interfere if an order of transfer was passed without jurisdiction or allegations of mala fide were raised.

Further the court went on to note that those students coming out of government schools were not at par with their counterparts from private schools and sought reviews of the teachers, in order to scrutinize the reasons for the same. The court further highlighted the same ‘Violation of Conduct Rules’ which is unambiguously impermissible in the private employment as it amounts to gross misconduct.

The Court went on to say that it is time the Court lays stress on ‘Teachers’ Duties’ than ‘Teachers’ Rights’.

The court rejected the relief in the petition and further directed state to investigate and act against teachers taking private tuitions. The state also directed to provide phone numbers on which complaints could be registered against misconduct of teachers inside as well as outside school premises.

The Court ordered that a ‘Teachers Periodic Work Assessment’ is to be maintained by the concerned setups.

Disclosure regarding vegetarian or non-vegetarian is part of consumer awareness; Article 21 and 25 are impacted by what’s served on the consumer’s platter; - Delhi High Court