Home Judiciary SLP Filed Before the SC, Challenges the Cut Off in the Teachers Recruitment Exam in UP as Arbitrary
Judiciary

SLP Filed Before the SC, Challenges the Cut Off in the Teachers Recruitment Exam in UP as Arbitrary 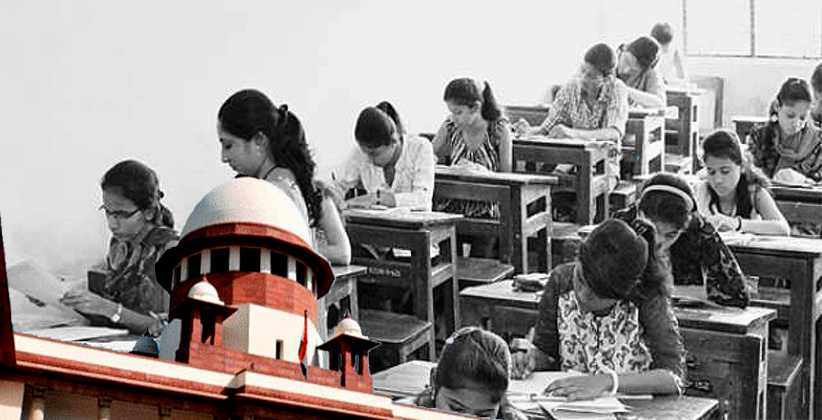 A Special leave petition has been filed in the Hon’ble Supreme Court of India on May 10, 2020, in the matter of Ram Sharan Maurya & Ors v. State of U.P. & Ars. against the impugned judgment and final order dated May 06, 2020, passed by the High Court of Judicature at Allahabad, Lucknow Bench. The matter pertains to the recruitment of the 69,000 teachers in the state.

The High Court had in the impugned order directed to the State of Uttar Pradesh to declare the result and acting on its direction, the Hon’ble Chief Minister had directed the concerned authorities to complete the hiring process within a week. The division bench of the High Court had delivered its verdict in the favor of the State, thereby vacating the order of the single-judge bench of the High Court and held that the examination for the recruitment of the teachers would be said to be passed only if the students from the reserved category clear the cut off of 60% and from the unreserved category clears the cut off of 65%.

As a matter of fact, the Uttar Pradesh Basic Education Act, 1972 was enacted to regulate and control basic education in the State. Section 19 of the Act authorizes the State Government to make Rules to carry out the purpose of the Act. Uttar Pradesh Basic Education (Teachers) Service Rules, 1981 (1981 Rules) lay down sources of recruitment and qualification for appointment of teachers.

In the case of State of U.P. and Ors. vs. Anand Kumar Yadav and Ars. ((2018) 13 SCC 560) the division bench of the Supreme Court had held that the appointment of Shiksha Mitras was not only contractual, but it also was not as per the qualification prescribed for a teacher nor on the designation of the teacher nor in the pay scale of teachers. Thus, they could not be regularized as teachers. In paragraph no 26, the Apex Court had held that,

“….they ought to be given an opportunity to be considered for recruitment if they have acquired or they now acquire the requisite qualification in terms of advertisements for recruitment for the next two consecutive recruitments. They may also be given suitable age relaxation and some weightage for their experience as may be decided by the concerned authority. Till they avail of this opportunity, the State is at liberty to continue them as Shiksha Mitras on the same terms on which they were working prior to their absorption, if the State so decides.”

The contention of the petitioners (a group of Shiksha Mitras) is that when the Supreme Court has in the case of Anand Kumar granted relaxation for the next two consecutive year, and if Shiksha Mitras are a homogeneous class in themselves, the qualifying marks in the Uttar Pradesh Assistant Teachers Recruitment Test varying from 40-45% in 2018 to 60-65% in 2019 would create discriminate among Shiksha Mitras.

According to them “fixation of different qualifying marks in the two examinations (ATRE - 2018 and ATRE - 2019) violates the principle of equality (Article 14 of the Indian Constitution) as intelligible differentia for classification between the two categories who appeared in the years 2018 and 2019 and prescription of qualifying marks in the two examinations has no reasonable nexus between the intelligible differentia and object sought to be achieved for classification.”

They also contended that the drastic fixation of cut-off marks at 60%-65% is arbitrary and it is kept so with a view to eradicating/disqualifying Shiksha Mitras from being appointed on the post of Assistant Teacher.

This petition is important for the petitioners as this is their last chance to compete for recruitment as Assistant Teachers in the light of the fact that the relaxation granted by the SC in Anand Kumar case is for two years and ends with 2019 recruitment. As an interim relief, petitioners have prayed for ex-parte stay, against the impugned judgment and final order of the division bench of Allahabad High Court.