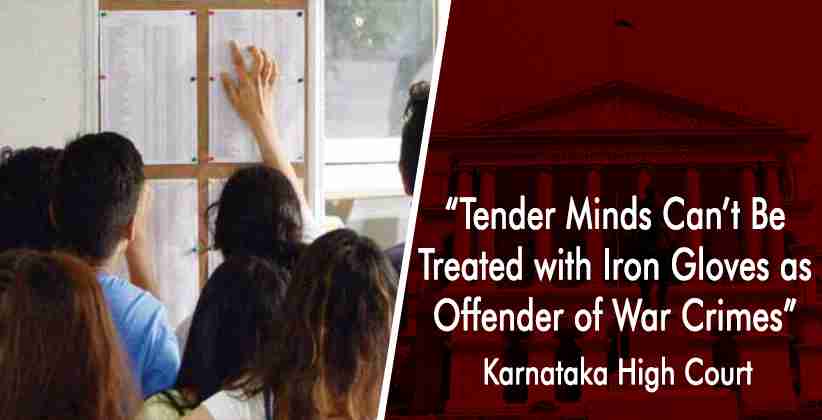 On 6th October, Tuesday Karnataka High Court was hearing a petition filed by a Class XII student who was giving her exam of Biology (AISSCE) (Main) 2020 which was canceled for using unfair means in the said Examination and her result declared as ESSENTIAL REPEAT.

The case of the petitioner was that on 14th February 2020 the petitioner appeared for Biology Examination (044), unmindfully she carried her mobile phone instrument to the Examination Hall which after the advertence was handed over to the Centre Invigilator allegedly a bit before the commencement of the said examination.

In connection with this incident, an enquiry was held, after receiving the explanation from the petitioner in terms of EXAMINATION BYE-LAWS 1995 promulgated by the Central Board of Secondary Education; the impugned punitive order has been issued to the effect that her exam in the subject Biology (044) of AISSCE has been canceled for using “Unfair means” and that she was declared as “Essential Repeat”.

As a consequence of the above punitive order, coupled with her failure in the Mathematics Examination, petitioner became ineligible to take up the “Compartment Examination” that was scheduled in September 2020, and eventually, she has to appear for the examinations under “Full Subject Category” which would be scheduled on the basis of new Syllabi and the Course Study.

The response to the allegation made by the petitioner was answered by respondent no 3 that is the regional officer of CBSE. It was contended that the allegation against the petitioner as to using “Unfair Means” in the examination has been held to be proved by the Unfair Means Committee comprising of four members, the versions of the petitioner and of her parents have been duly considered by the Committee, the Reports of the Invigilator & the Centre Superintendent have also been kept in view, the Rules & Procedures have been scrupulously followed.

After hearing the contention of both the parties the court observed that “the thrust of the prohibition enacted in the subject Bye-law is not just carrying the “barred items” but carrying it “during the course of the examination”; this expression cannot be likened to the term “during the course of employment” used in Section 3 of the Employees Compensation Act, 1923.”

“The expression employed in this Bye-law; suffice it to say that, carrying any material before the commencement of the examination per se does not fall within the parameters of the fault-line on which this Bye-law is structured; an argument to the contrary, cannot be countenanced without bruising the text & intent of this Bye-law.”

On this ground, the court said that the petition must be allowed, and relief must be granted to the petitioner.

The court also took into consideration the point of time and said: “her assertion that she had deposited the said instrument at 9.55 am i.e., prior to the commencement of the examination with the official of the Examination Hall gains acceptance, since admittedly it was returned to her after the examination was over and with no much murmur; the timing of the deposit and demeanor of the student could have been ascertained from the CC-TV footage which was not done.”

“The mobile phone instrument was handed to the Centre Invigilator by the petitioner before the examination was commenced, becomes evident by the fact that it was sent to her School which in turn delivered it back to her after the examination and on the same day.”

The main statement which the court gave was that “tender minds even when they commit some significant mistakes, cannot be treated with iron gloves.”

The court directed to announce the result of the petitioner’s Biology (044) examination held on 14.03.2020 and to issue to her the Statement of Marks. Further, it directed the Central Board of Secondary Education to organize necessary examination for the petitioner along with other such candidates if any so that they complete the All India School Certificate (Main) Examination 2020 with the same Syllabi and the Course Study on or before 31st December 2020.