Home Judiciary There should be devotion in politics, not politics in devotion: Ktka HC [Read Order]
Judiciary 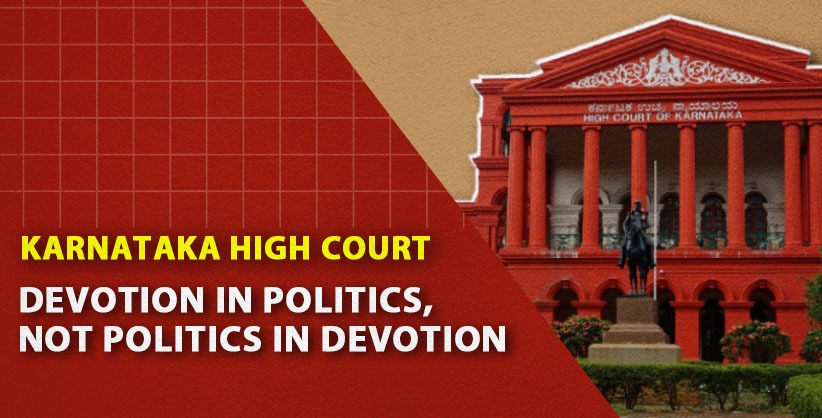 The Karnataka High Court has said that there should be devotion in politics; and not politics in devotion, while taking up a plea related to shifting of the idol from new temple to the old one in Chitradurga district.

Justice M Nagaprasanna ordered status quo in the matter, while noting that the issue was completely shrouded in politics with regard to the place of worship.

After hearing both the sides, the court allowed the petition in part and ordered the parties as well as the authorities not to generate disturbance about the place of the deity and maintain law and order strictly.

“The parties to the lis are at liberty to agitate their respective grievances or claim their respective rights over the deity continuing in the new building or to be shifted to the old temple by approaching the competent civil court. Till such time, status quo as on today shall be maintained which would be subject to the result of any suit, if instituted,” the court said.

The court also directed that the state government should ensure that public safety is kept at the forefront while taking any decision.

“If the pleadings and the submissions are noticed, they are completely shrouded with politics being played with regard to the place of worship. In the peculiar facts, it is politics that has led the petitioners to this court. People who worship are not complaining, it is the people who play with the emotions of such worshippers are at squabble. Therefore, this court is constrained to observe “there should be devotion in politics; and not politics in devotion.”

The petitioners led by Prakash and others were the trustees of Kamasaagara Beeralingeshwara and Hinde Mallikarjunaswamy temple at Doddathekalavatti village, Hosadurga taluk in Chitradurga district.

The petitioners belonged to the Hori Kuruba community. They  claimed that a new temple was inaugurated in 2015 and an idol was also installed in the new temple by shifting it from the old temple.

However, in the year 2020, some local people on the instruction of former MLA Govindappa tried to take away materials and properties of the new temple and shift it to the old temple, which was in a dilapidated condition, they contended.

MLA Govindappa and others, on the other hand, submitted it was the petitioners who, on the ground that a new temple was constructed, took away the deity from the old temple but never returned it.

They further submitted that the deity belonged to the old temple and it has been decided in the 1982 civil proceedings.

In its order, the HC said, "If the deity is to be worshipped people can worship the deity at the new temple itself. Political consideration or any such agenda as alleged should not take away public interest or public safety, in the deity being shifted from one place to the other. However, it is needless to observe that in the interest of the community people as also the devotees who visit the temple, the deity to be continued in the new temple rather than shifting to the old temple which is in a dilapidated condition thereby exposing the idol to all vagaries of nature."