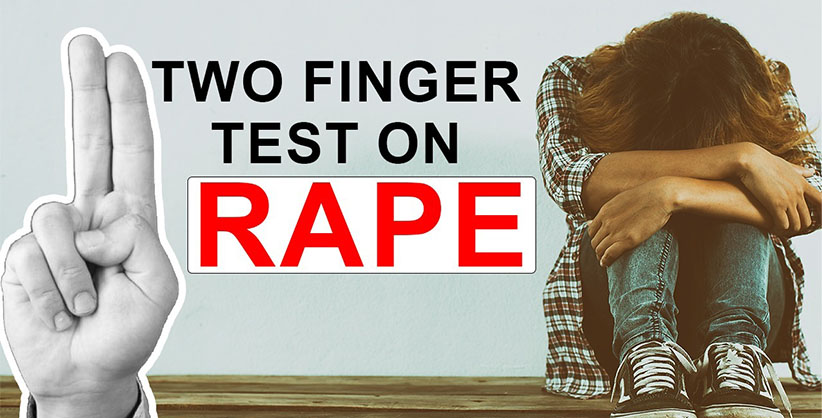 NEW DELHI: The Supreme Court on Monday said that anyone conducting the two-finger test on rape survivors would be guilty of misconduct, declaring the invasive procedure adopted to ascertain sexual history of the victim as patriarchal, sexist and unscientific.

A bench of Justices D Y Chandrachud and Hima Kohli said it is regrettable that "two finger test" continues to be conducted even today.

"It is patriarchal and sexist to suggest that a woman cannot be believed when she states that she was raped merely because she is sexually active," the bench said.

The bench also pointed out this court has time and again deprecated the use of two finger test in cases alleging rape and sexual assault.

"The so-called test has no scientific basis. It re-victimises and re traumatises the women. The two finger test must not be conducted. The test is based on an incorrect assumption that a sexually active woman cannot be raped. Nothing can be further from the truth", the bench added.

Justice Chandrachud, who authored the judgment on behalf of the bench, said the probative value of a woman’s testimony does not depend upon her sexual history.

The bench said in terms of Section 53A of the Evidence Act, evidence of a victim’s character or of her previous sexual experience with any person shall not be relevant to the issue of consent or the quality of consent, in prosecutions of sexual offences.

The court also pointed out the Ministry of Health and Family Welfare had issued guidelines proscribing the application of the “two-finger test”.

“Although the two-finger test in this case was conducted over a decade ago, it is a regrettable fact that it continues to be conducted even today,” the bench said.

The top court directed the Centre and state governments to ensure that the guidelines formulated by the Ministry of Health and Family Welfare are circulated to all government and private hospitals. “Review the curriculum in medical schools with a view to ensuring that the two-finger test or per vaginum examination is not prescribed as one of the procedures to be adopted while examining survivors of sexual assault and rape,” the bench ordered.

It also directed the authorities concerned to transmit these directions to concerned department, which includes Principal Secretary (Department of Public Health) of each state and superintendents of police.

It also directed the government to conduct workshops for health providers to communicate the appropriate procedure to be adopted while examining survivors of sexual assault and rape.

“Any person who conducts the “two-finger test” or per vaginum examination (while examining a person alleged to have been subjected to a sexual assault) in contravention of the directions of this court shall be guilty of misconduct," the court said.

The high court overturned the conviction of an accused charged with rape and murder of a minor girl. The accused had raped the victim in November 2004 and set her on fire. The victim succumbed to burn injuries in December 2004.

The victim’s vaginal examination revealed that two fingers were admitted easily. The doctor stated that the deceased may have engaged in intercourse prior to date of the alleged crime, and that the admission of two fingers in her vagina meant that she was habituated to sexual intercourse.

The high court acquitted the accused, as the family members of the deceased were declared to be hostile witnesses, even though the deceased disclosed that the respondent raped her before setting her on fire.

The top court noted the dying declaration makes it abundantly clear that the respondent raped the deceased, poured kerosene on her, and set her on fire.

Supreme Court to hear plea against CAA on Dec 6