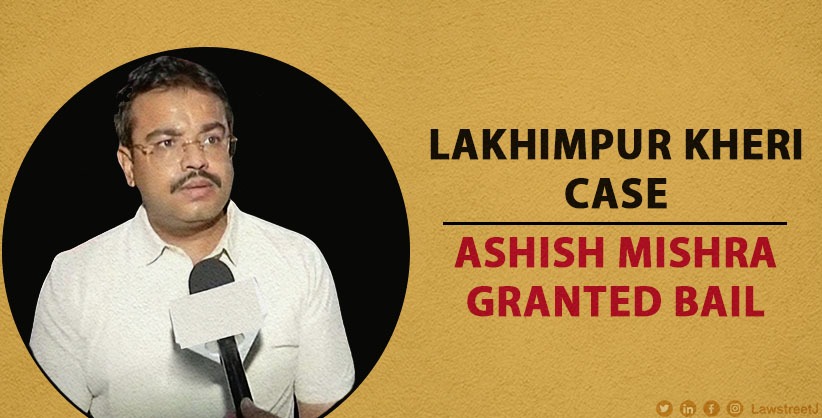 NEW DELHI: The Supreme Court on Wednesday ordered release of Ashish Mishra, son of Union Minister Ajay Mishra on interim bail for eight weeks in a case related alleged killings of farmers with a speeding car in Lakhimpur Kheri case in order to ensure procedural fairness as there were two versions of the incident.

The top court also decided to monitor the Lakhimapur Kheri case trial, since it ordered the trial judge to send progress reports after every date of hearing. It also noted Mishra has been in jail for over one year and the trial court said it would take more than five years to conclude the proceedings, and while there are two versions and two separate FIRs with regard to same incident.

"It is imperative to balance the rights of petitioner’s liberty emanating under Article 21 vis¬-a-vis the State’s right to ensure a fair and proper trial and safeguard the legitimate outcry of the victim(s) of crime," a bench of Justices Surya Kant and J K Maheshwari said.

The court provided relief to Mishra while imposing strict conditions including that further extension of his bail would depend upon his conduct during the release.

"We are conscious of the grave allegations levelled against the petitioner but we must also acknowledge that principles of procedural fairness require these allegations to be proven in trial proceedings. In the present case, charges have been framed, and petitioner is in custody for more than a year. In view of the large volume of oral and documentary evidence, which the prosecution is entitled to lead in both the cases, coupled with the defence evidence, if any, trial cannot be expected to be concluded that early," the bench said.

The court also restrained Mishra from entering Uttar Pradesh and Delhi. It directed him to leave Uttar Pradesh within one week of his release from jail.

The bench also granted interim bail to four accused in cross case of lynching of car occupants, by using its suo motu power.

In the order pronounced by Justice Kant, the bench clarified that any threat to witnesses by the accused or family will result in cancellation of bail.

"If it is found that he is trying to delay the trial, it would be valid ground to cancel his bail," the bench said.

The court listed the matter for March 14 for further directions.

In its order, the bench also noted, "For the same incident we are confronted with two completely different narratives which necessitates a full¬ blown trial to scourge out the actual facts. Regardless, we must be cognisant that the unfortunate grave incident is reported to have led to the loss of eight lives, consisting of four protesting farmers, one journalist and the other three who were part of the petitioner’s convoy."

On January 19, the court had reserved its judgement in the matter.

The Uttar Pradesh government had opposed the bail plea, saying his offence is grave and heinous and any relief to him would send a wrong signal to the society.

The victims claimed the grant of bail will send a terrible message to society.

On October 3, 2021, eight people were killed in Lakhimpur Kheri district's Tikunia in a violence that erupted when farmers were protesting against UP Deputy Chief Minister Keshav Prasad Maurya's visit to the area.

The FIR lodged by Uttar Pradesh Police claimed four farmers were mowed down by an SUV, in which Ashish Mishra was seated.

After the incident, a driver and two BJP workers were allegedly lynched by angry farmers. A journalist also died in the violence.