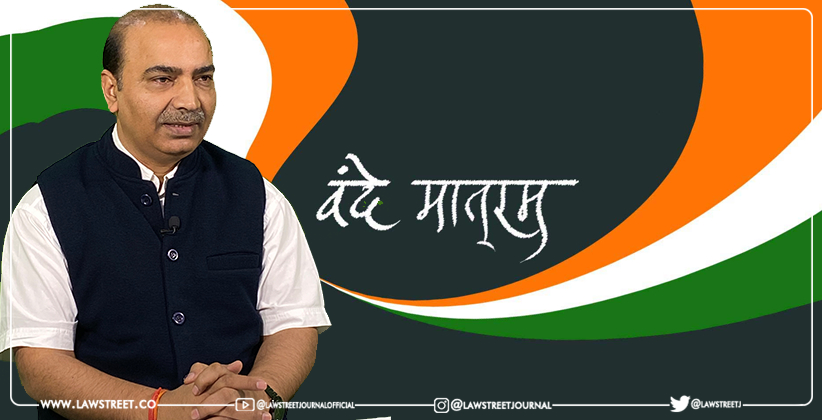 Today, the Delhi High Court has issued notice on the PIL that has been filed by BJP leader and Advocate Ashwini Kumar Upadhyay seeking a declaration that 'Vande Mataram', written by Bankim Chandra Chatterjee, be given the same respect as the National Anthem, 'Jana Gana Mana' penned by Nobel Laureate Rabindranath Tagore.

A division bench comprising Acting Chief Justice Vipin Sanghi and Justice Sachin Datta issued notice to the respondents and sought their reply within six weeks. The matter will be heard on November 9, 2022. (Ashwini Kumar Upadhyay vs Union of India and Ors.)

“Since he (Upadhyay) is a serious litigant who files petitions in public interest, we are entertaining the writ petition”, the Bench recorded in its order.

The respondents in the petition are Ministry of Home Affairs, Ministry of Education, Ministry of Law and Justice, Ministry of Culture, Government of NCT of Delhi and National Council for Education Research and Training (NCERT).

In his plea, Upadhyay has said that the national song played a vital role in the Independence movement and was first sung in a political context by Rabindranath Tagore at the 1896 session of the Indian National Congress. 'Vande Mataram' was the whole nation's thought and motto for independence from the British during the independence movement.

The PIL states that,

"The song ‘Vande Mataram’, which had played a historic part in the struggle for Indian freedom, shall be honoured equally with ‘Jana-Gana-Mana’ and shall have equal status with it in spirit of the Statement made by the Constituent Assembly Chairman Hon’ble Dr. Rajendra Prasad with regard to the National Anthem, on 24.01.1950."

"Vandemataram' is the symbol of our history, sovereignty, unity and pride. If any citizen by any overt or covert act shows disrespect to it, it would not only be an anti-social activity but it would also spell doom to all our rights and very existence as a citizen of a sovereign nation. Every citizen must therefore not only refrain from any such activities but also do his best to prevent any miscreant trying to show any disrespect to 'Vandemataram'. We must be proud of our Nation, our Constitution, National Anthem and National Flag and put national interest above our personal interests and only then will we be able to protect our hard-earned freedom and sovereignty. It is the duty of the executive to frame a national policy to promote and propagate 'Vandemataram'."

Further, the PIL also states that it is the duty of every Indian to show respect when Vandemataram is played or sung, further adding that Vandemataram should not be utilized by the person involved with it directly or indirectly and shall have any commercial benefit. It reads,

It has also urged the court to direct the government to ensure both songs are sung in all schools on every working day. It reads:

"Petitioner also seeks direction to respondents to ensure that ‘Jana-Gana-Mana’ and ‘Vandemataram’ is played and sung in all schools and educational institutions on every working day."

The petition has contended that,

"India is a Union of States and not an association or confederation of States. There is only one nationality i.e. Indian and it is the duty of every Indian to respect the Vande Mataram. In order to keep the country united, it is the duty of the Government to frame a National Policy to promote-propagate ‘Jana Gana Mana’ and Vande Mataram. There is no reason why it should evoke any other sentiment as the both are decided by Constitution makers.  The sentiments expressed in ‘Jana Gana Mana’ have been expressed keeping the State in view. However, sentiments expressed in ‘Vande Mataram’ denote the nation’s character and style and deserve similar respect."

It has sought a declaration that 'Vande Mataram' shall be honoured equally with the song 'Jana Gana Mana' and shall have an equal status with it.

The plea thus seeks directions on the Centre to frame guidelines in spirit of the Constituent Assembly Resolution read with the Judgment passed by the Madras High Court and Supreme Court of India.

In addition to this, the petition has also sought a direction to the central government to frame a national policy to promote and propagate both the National Anthem and the National Song.