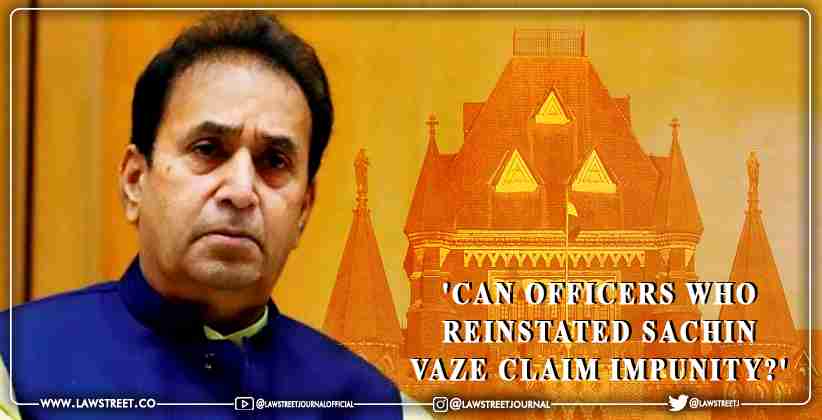 The Bombay High Court said on Monday (July 12, 2021) that one would have to get to the root of the corruption allegations made against former Maharashtra Home Minister Anil Deshmukh and wondered if those behind reinstating police inspector Sachin Vaze could claim impunity.

Mr. Vaze was reinstated last year after being on suspension for 17 years for the custodial death of Khwaja Yunus in 2002. He is currently lodged at Taloja Central Jail in connection with the recovery of explosives near Mukesh Ambani’s residence and the Mansukh Hiran murder case.

A division bench of Justice S.S Shinde and Justice N.M Jamadar was hearing a plea filed by Mr. Anil Deshmukh to quash the FIR registered against him by the Central Bureau of Investigation (CBI) after another division bench directed to inquire into the corruption allegations against him. Former police commissioner Param Bir Singh had written to Chief Minister Uddhav Thackeray accusing Mr. Deshmukh of having directed Mr. Vaze to collect Rs. 100 crores from bars and restaurants in a month.

The bench then questioned Additional Solicitor General Aman Lekhi, appearing for the CBI, what had prevented Mr. Singh from inquiry against Mr. Deshmukh as soon as he got to know of his alleged misconduct?

“In any department, an individual cannot do it (corruption and malpractices) alone. As long as everyone is happy, none complains. But the moment there is a transfer, someone speaks. In this case, who is the main collector? Is it Vaze as per allegations? How was he inducted? Why did the highest officer not investigate when he was informed about the malpractices?”, the court asked.

Mr. Lekhi opposed Deshmukh’s claim that the central agency had failed to take the consent of the Maharashtra Government before registering the FIR. He argued that Mr. Deshmukh had given Vaze a money collection target. “It is not a Minister’s job to give targets to police officers. This case is one of maladministration and misgovernance.”

“Corruption is the root cause because of which system is paralyzed. Nobody should be left out and everyone should be investigated,” Justice Shinde said.

Seeking dismissal of Deshmukh’s plea, Mr.Lekh said that this is a case of alleged corruption and it needs to be “detected and eradicated at the earliest”. He added that CBI had found “mandatory facts” that are needed to be probed and allowing the plea will “stifle” the same.

Senior Counsel Amit Desai and Advocate Kamlesh Ghumre, representing Deshmukh, said that “intentionally leaving out” names of police officers and only naming Deshmukh in the FIR was an “attempt to besmirch his reputation” and shield officers involved.

The High Court went to ask the CBI to submit a progress report on its investigation in a sealed cover.

The bench reserved its judgment.