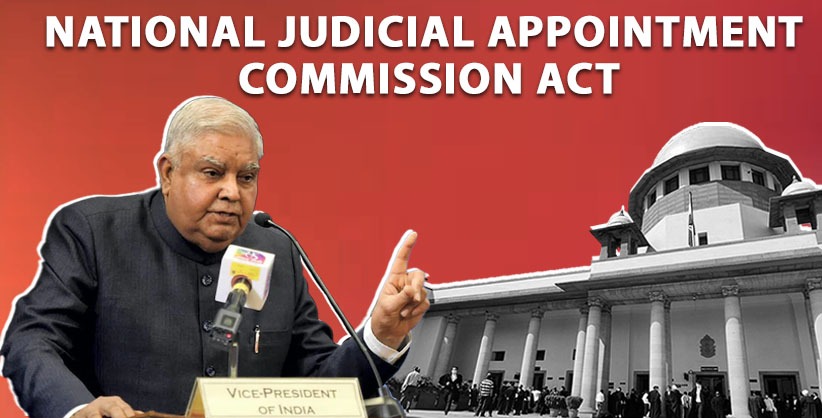 NEW DELHI: Vice President Jagdeep Dhankar on Friday questioned the Supreme Court's five-judge bench decision which had "undone" the mechanism replacing the Collegium system for appointment of judges in the Supreme Court and High Courts.

"Power of the people, which was expressed through a legitimate platform, that power was undone. The world does not know of any such instance," he said.

Speaking at eighth L M Singhvi Lecture here on 'Universal Adult Franchise: Translating India's Political Transformation into a Social Transformation', Dhankar, himself a designated senior advocate, asked, "If a constitutional provision that carries the ordainment of people at large in such a vibrant democracy, is undone, what will happen?"

"In the year 2015-16, the Parliament was dealing with a constitutional amendment act and as a matter of record the entire Lok Sabha voted unanimously. There was no abstention and no dissention. And the amendment was passed. In Rajya Sabha, it was unanimous, there was one abstention. We the people – their ordainment was converted into a constitutional provision," he pointed out.

"I’m startled that after this verdict, there was no whispering in the Parliament. It was taken as such. This is too serious an issue. We are proud of our judiciary. It has contributed to the growth of promoting the rights of the people," he added.

He appealed to everyone that these are the issues that should not be viewed on partisan lines.

"I expect everyone to rise to the occasion and be part of the growth story that is India at the moment," he said.

Maintaining that the basic of the basic structure is primacy of the will of the people, he said, "In democracy, there can be nothing more basic than the prevalence of the rights of the people. And the ordainment of the people should be reflected through a legitimised mechanism which is the legislature in a sanctified manner."

"I’m sure it is never too late to reflect and think. Our judiciary is one of the critical institutions of governance long with the executive and legislature. The doctrine of separation of powers is fundamental to our governance. The harmonious working of these institutions is vital for the growth of democracy. Any incursion, howsoever subtle, in the domain of one by another has the capacity to unsettle the apple cart of governance," he maintained.

Dhankar also said India is the world’s most vibrant democracy that is representative to an ideal level.

"We started with the Constituent Assembly in which members were enormously talented from all sections of society. But progressively with each election our parliament reflects authentically the mandate of people …wisdom of the people. And now what we have in the parliament is fairly representative. at a global level we do not have a parallel on that count," he said.

Maintaining that –interest of Bharat – should be kept above everything else, he said Indian parliament reflected the minds of the people.