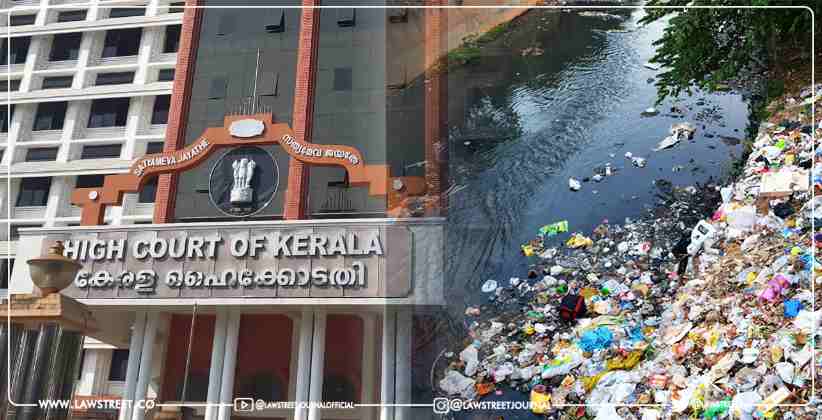 Those who dump waste into canals and drains, increasing the flooding of roadways and clogging drains in the state of Kerala, have been ordered by the Kerala High Court to be punished severely in the case of "Treasa K.J & Anr. v State of Kerala & Ors."

When it came time to issue the interim order, Justice Devan Ramachandran stated that the Court was forced by the large-scale inundation that had taken place as a result of the recent rains to control drainage and flood mitigation systems in the city.

According to J. Devan Ramachandran:

"As far as cleaning of canals and prevention of dumping waste and plastic into them is concerned, the Secretary of the Corporation is put on notice by the court that every necessary and effective measure shall be initiated and ensured on a war footing from this moment onwards. Persons who violate the directions of the Corporation, as mandated by law, against the deposit of garbage into the canals shall be taken to task under the fullest warrant of law, to make it a deterrent against others, who may be under the wrong impression that such activities will be tolerated. "

To that end, the Court noted that even if citizens were to install canal fencing, it would have no effect unless they realised that it was their responsibility to keep the canals clean and clear of waste. Because of this, the company was required to use all available means of promotion in the interest of all stakeholders to advertise and publicise the imperatives outlined above.

In 2018, a petition was filed by the Cochin Corporation regarding the blocking of a waterway. In 2018, unprecedented floods in the city served as a warning to the public about the gravity of the problem. As a result of more than 20 rulings issued by the court, the city was spared from large-scale flooding in 2020 and 2021.

According to the judge, "Operation Breakthrough" was also conducted to clean up the city's large canal system. There were numerous issues that prevented completion of the third phase of the operation, which has been documented in the prior orders.

As a result of the heavy rains and subsequent flooding that have been plaguing Kerala in recent days, the Supreme Court decided to take up the matter today on an emergency basis. It then ordered the leader of the Operation Breakthrough team to submit reports and comments detailing the efforts taken and those to be made in the wake of the flooding that Cochin residents experienced earlier today.

As per the Order:

“The reports shall be comprehensive, so that the court can issue orders to ensure that such events are, as far as is practically possible, averted during this monsoon season, which is at our doorstep already.”