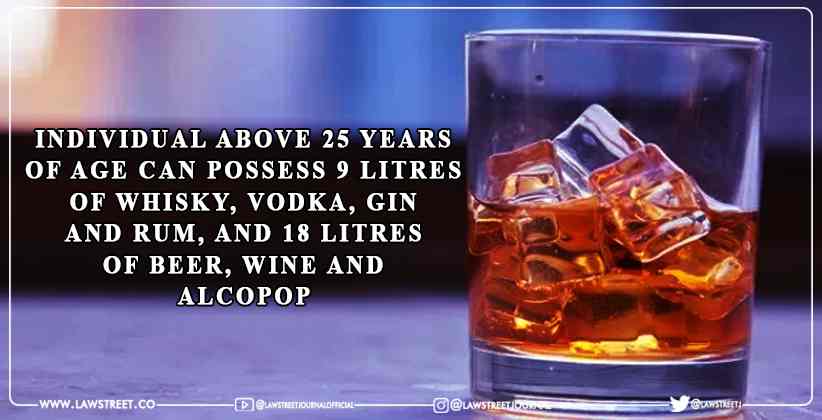 The Delhi High Court through the bench of Justice Subramonium Prasad has held that an individual of above 25 years of age can possess 9 litres of whisky, vodka, gin and rum, and 18 litres of beer, wine and alcopop. The decision came upon the Court’s pursuance of a case wherein 132 bottles of liquor had been recovered from the Petitioner’s house, containing 51.8 litres of whisky, vodka, gin, rum, and 55.4 litres of beer, wine.

While stating its judgement the Court highlighted Rule 20 of the Delhi Excise Rules, 2020.

“20. Maximum limit for retail sale and individual possession of liquor The maximum quantities of intoxicants specified below, which for the purposes of the Act, may be sold by retail and possessed exclusively, by an individual not below the age of twenty five years in Delhi, shall be as follows:— (1) Indian Liquor and Foreign Liquor (i) Indian Liquor and Foreign Liquor (Whisky rum, gin, vodka, and brandy), except wine liqueur, beer, cider and alcopop; nine litres; ii) Wine, beer, liqueur, cider and alcopop; eighteen litres; (iii) Indian Liquor or Foreign Liquor; one litre while entering into Delhi from other States; (iv) Foreign Liquor; two litres while entering into Delhi from other countries.”

As in the present case the joint household of the petitioner comprised of 6 adults above the age of 25 years, the permissible limit upon the application of the abovementioned Rules would be 54 litres of whisky, vodka, gin & rum, and 108 litres of beer, wine & alcopop. The quantity found however was exceedingly high from both the units.

The Court was hearing a petition filed under Articles 226(Power of the High Court to Issue Writs) and 227 (provides for the power of superintendence over all Courts and Tribunals throughout the territory by the High Courts) of the Constitution of India read with Section 482 CrPC seeking quashing of FIR No. 467/2020 registered at Police Station Hauz Khas for offence under Section 33 of the Delhi Excise Act, 2009, along with stay of investigation under it.

Section 482 CrPC mentions the ‘Saving of inherent powers of High Court’. “Nothing in this Code shall be deemed to limit or affect the inherent powers of the High Court to make such orders as may be necessary to give effect to any order under this Code, or to prevent abuse of the process of any Court or otherwise to secure the ends of justice.”

The seized 132 bottles of liquor were found in a South Delhi house after the police raided it upon receiving information of illicit liquor storage there. Upon being asked about a valid license in order to hold such quantity of liquor, the owner denied the presence of one.

Cause Title: Avijeet Saluja vs State of NCT of Delhi