Home Judiciary “Why only one Advocate to litigate before the High Court?”: Allahabad High Court questions the CBI
Judiciary 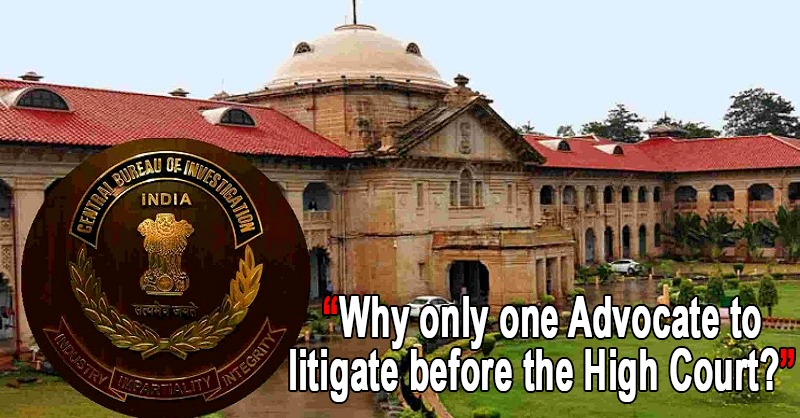 On 8th day of September 2020, the Central Bureau of Investigation was asked by the High Court of Judicature at Allahabad that why only one Advocate has been appointed to argue all the CBI cases in the High Court.

It happened when the court was taking the trial of hearing the bail application of former Assistant Postmaster, charged under the Prevention of Corruption Act 1988, and for commencing forgery and falsification of accounts.

It further stated that because of poor health conditions the ASG could not appear before the Court and hence there was no authorized personnel to make a submission on the behalf of the CBI.

After hearing the counsel present on behalf of ASG, the Hon’ble Bench Justice Chandra Dhari Singh pronounced in exact words that “it is very strange that CBI is keeping only one Advocate to argue the matter, and nobody is available to assist the learned A.S.G. The Court has taken a very serious view of the matter as nobody is available to assist the court on behalf of the CBI in absence of learned A.S.G”.

The court directed the Deputy Legal Advisor, CBI to file a personal affidavit within two weeks, explaining the reason as to why only one Advocate is assigned to arguecases of the CBI filed before the Hon’ble High Court and assigned the new date of hearing as the 22nd day of September, 2020.