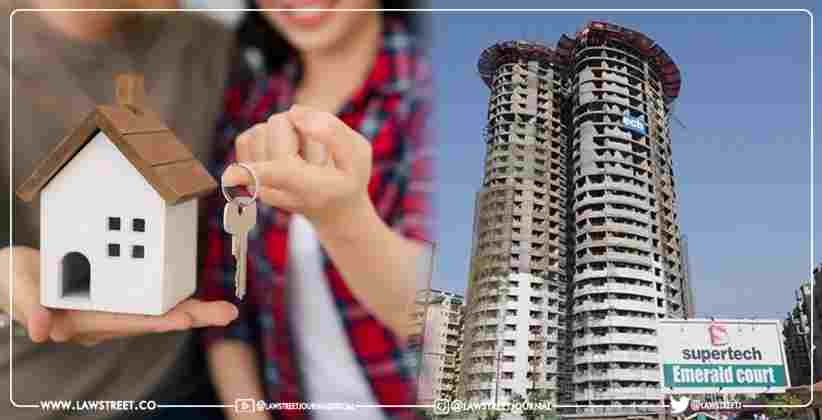 On being told that the Supertech Ltd - whose twin towers in Noida were ordered to be demolished for violation of building rules - was undergoing insolvency, the Supreme Court April 4 , 2022 , Monday directed the Interim Resolution Professional(IRP) to segregate the claims of unpaid homebuyers from other creditors.

The erstwhile management of Supertech Limited on Monday told the Supreme Court on Monday  that only 59 homebuyers out of 711 have to be refunded in because  of the  Supreme Court order dated August 31, 2021 by which the demolition of the twin towers was ordered.

The submission was made before a bench of Justices DY Chandrachud and Surya Kant in a contempt petition filed by the Flat buyers, alleging non-compliance of directions to pay refund to the flat buyers.

Senior Advocate S Ganesh, representing the developer, informed the court that the insolvency resolution procedure against Supertech had begun. He further referred the NCLT's March 25, 2022 order, asserting that the developer had settled 652 out of  711 claims, only 59 were remaining  to be settled . He also asked the court to segregate the homebuyers' claims from other creditors.

"I don't want CIRP proceedings to stand in the way. This is an appropriate case to exercise powers under Art 142 [1]as all these claims emanate from the judgment dated August 31, 2021 and its a direct consequence. Only quantication has been delayed. Some of them, despite repeated contacts, have not gotten back to us. The IRP be directed to gather the particulars of these 59 at buyers and file a status report first and their claims should be kept separately. They need not join the rank of other creditors as the amount demanded by them is miniscule as compared to 100's of crores claimed by the banks," Senior Counsel submitted.

Advocate Abraham Mathews, appearing for the homebuyers, requested the bench to keep the contempt petition pending to monitor the subsequent developments, to which the bench agreed.

It may be noted that the Apex Court on February 4, 2022 had directed that payment of the amounts of refund as computed by the Amicus Curiae shall be made to the home buyers on or before February 28 .

"Where home loans are outstanding, the developer shall clear the home loans on or before March 31 and furnish NOCs from the concerned financial institutions to the home buyers no later than April 10; and in respect of those home buyers who have entered into settlement with the developer, the settlement shall govern the rights and obligations of the respective parties," the bench had said in its order.

The bench of Justices D. Y. Chandrachud and Surya Kant had previously stated that 38 property buyers have filed various impleadment applications with the court, adding that the home buyers are demanding refunds under the court's final judgement and order dated August 31, 2021 (through which the demolition was ordered).

On Monday (April 4), the bench, to resolve the outstanding claim of homebuyers, issued the following directions:

142. Enforcement of decrees and orders of Supreme Court and unless as to discovery, etc ( 1 ) The Supreme Court in the exercise of its jurisdiction may pass such decree or make such order as is necessary for doing complete justice in any cause or matter pending before it, and any decree so passed or orders so made shall be enforceable throughout the territory of India in such manner as may be prescribed by or under any law made by Parliament and, until provision in that behalf is so made, in such manner as the President may by order prescribe

(2) Subject to the provisions of any law made in this behalf by Parliament, the Supreme Court shall, as respects the whole of the territory of India, have all and every power to make any order for the purpose of securing the attendance of any person, the discovery or production of any documents, or the investigation or punishment of any contempt of itself