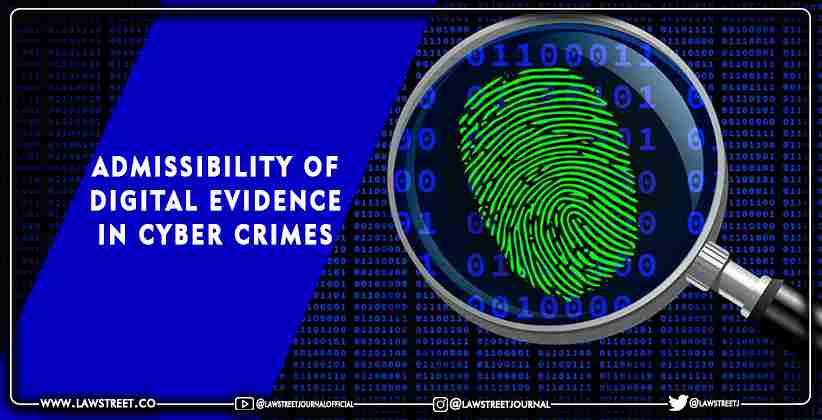 With the large-scale adoption of computer, electronic devices and the internet, there has also been a proliferation of cyber-crimes. These crimes can take myriad forms like fraud, impersonation, child pornography, denial of service attacks etc.

The traditional judicial system based on physical evidence and eyewitness testimony are ill-equipped to fight these sophisticated attacks as evidence for such crimes seldom exist in material form. These crimes generate data stored as digital records, and courts can apportion liabilities only after studying such digital evidence. The enormous size of these records and the fact that they are easily tampered with makes it a challenge to ascertain their authenticity and to consider them as evidence.

Secondary evidence refers to evidence used to prove the contents of a document which could have been the primary evidence in a case. Section 63 of the Indian Evidence Act, 1872 provides a list of evidence that a party can submit as secondary evidence, which includes:

Section 65 of the Indian Evidence Act, 1872 lays down that secondary evidence, instead of primary evidence, can be used to prove the existence, condition or contents of a document when the original document:

Section 64 of the Indian Evidence Act, 1872 lays down that documents must be proved by primary evidence except in situations provided in Section 65 of the Act.

Before significant amendments to the Indian Evidence Act, 1872 in the year 2000, the legislative and judicial approach to digital evidence was similar to documentary evidence. The courts examined the secondary evidence for the existence, conditions and contents of digital records submitted to it in the form of printouts or transcripts. But the authenticity of this digital evidence was verified by a competent signatory who was to identify the signature in court and be open to cross-examination in court. Sections 63, 64 and 65 of the Indian Evidence Act, 1872 provides the procedure for the activities mentioned above.

But with time, with the broader adoption of digital means of communication and data storage, the variety and volume of databases increased tremendously, which called for a reform in how the legal and judicial system approaches digital evidence. The Information Technology Act, 2000 introduced the concept of 'electronic record’ in the Indian Evidence Act, 1872.

The term ‘electronic record’ is defined in Section 2(1)(t) of the Information Technology Act, 2000 as ‘data, record or data generated, image or sound stored, received or sent in an electronic form or microfilm or computer-generated micro fiche'. Section 4 of the Information Technology Act, 2000 provides for the use of electronic records in place of paper-based documents. Section 4 states that:

“Where any law provides that information or any other matter shall be writing or in type-written or printed form, then, notwithstanding anything contained in such law, such requirement shall be deemed to be satisfied if such information or matter is:

The legislature's intention to give absolute recognition to electronic record is evident from the non-obstante clause included in the wording of the above section.

The Information Technology Act, 2000 also inserted Sections 65A and 65B in the Indian Evidence Act, 1872, to give a separate mechanism for the admission of electronic records as evidence. Section 65A states that ‘contents of electronic records may be proved in accordance with the provisions of section 65B’.

Conditions for Admissibility of Digital Evidence

Section 65B (1) of the Indian Evidence Act, 1872 is a provision that simplifies the question of admissibility of electronic records as evidence by eliminating the need for additional proof of authenticity and production of physical copies, provided the records satisfy certain conditions. These conditions are of two types: technical and non-technical.

The technical conditions for the use of electronic records as evidence laid down in Section 65B (2) of the Indian Evidence Act, 1872 are that:

Section 65B (4) lays down the non-technical requirements for using electronic records as evidence. The requirement calls for a certificate by a person in a responsible official position concerning the device used for making the record.  The certificate should be identifying the electronic record and describing the procedure involved in producing the record or giving the recording devices' particulars. For this certificate, it shall be sufficient for the person giving it to state that the matters mentioned in it are accurate to the best of his knowledge and belief.

Other changes to the Indian Evidence Act, 1872 for admissibility of electronic evidence are:

These sections show that the law as it stands today provides for the production of information in digital form as evidence in a court of law without the additional burden of producing them in tangible form and proving the authenticity of such copies.

Judicial Precedents in the Admissibility of Digital Evidence

Even after the enactment of these enabling provisions, courts were cautious in their approach to digital evidence.

In State v. Navjot Sandhu (AIR 2005 SC 3820), the Supreme Court followed the earlier approach of demanding secondary evidence under Sections 64 and 65 of the Indian Evidence Act, 1872.

In 2018 the Supreme Court clarified that the requirement of the certificate as laid down in Section 65B (4) of the Indian Evidence Act, 1872 in using electronic records as evidence could be relaxed for ensuring justice. The judgement was given by a bench comprising of Justices A. K. Goel and U. U. Lalit. The court observed that the certificate could be demanded only when the digital evidence is submitted by a person who also produced the evidence.

However, in 2020 a three-judge bench of the Supreme Court gave a verdict contradictory to the above 2018 judgment in Arjun Panditrao Khotkar v. Kailash Kushanrao Gorantyal that the certificate in 65B (4) of the Indian Evidence Act, 1872 is mandatory for admissibility of electronic evidence.

Thus, under the present position of law, electronic records in digital form can be used as evidence in court if it satisfies the technical and non-technical conditions laid down in Section 65B of the Indian Evidence Act, 1872.

In the case of cyber-crimes, the evidence in digital form can be admissible in court without expert testimony to prove its validity. Thus, call recordings, screenshots, spreadsheets, audio/video files etc., can be submitted as evidence without the need for copies or transcripts, and most often requires only a certificate by the victims themselves.