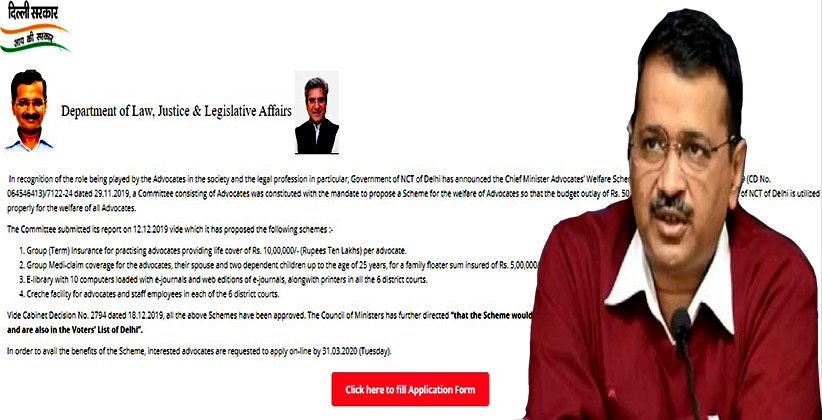 In order to praise the role of lawyers played in the society as well as in their legal profession. Government of National Capital Territory of Delhi announced the implementation of Chief Minister’s Advocate Welfare Scheme.

The Department of Law, Justice and Legislative Affairs stated that “All the advocates who are enrolled with Bar Council of Delhi and are also in the voters’ list of Delhi, are hereby informed that the process of registration under the Chief Minister Advocates’ Welfare Scheme has been started”.

The welfare scheme is supposed to provide Group Term Insurance to the Advocates who are practicing the life cover of Rs 10 Lakh and Group Mediclaim coverage for advocates, their spouse and two dependent children up to age of 25 years for a family floater sum insured of Rs 5 Lakh.

The government of NCT of Delhi has observed the importance of the having the link to be active on the law department’s website so that the concerned personnel can use the services. The registration will be active on 21st March at 9:30am and would remain active till the end of the month i.e. 31st March 2020.

Furthermore, the law department will also be sending a SMS notification to all the registered members practicing under Bar Council of Delhi.

This decision to apply the scheme was taken during a meeting which was chaired by the State Law Minister Kailash Gehlot on 16th March 2020. Based on the analysis done by the Bar Council of Delhi, 40,115 advocates are eligible to enjoy the benefits under the scheme.

“IT Department shall prepare a customized on-line application form with OTP facility which shall be available at a link on the website of Law department. This application form may be filed in by the advocate who intends to avail the benefits of the scheme.”, the minutes of the meeting state.

The setting up of this kind of fund was decided in November last year itself, when the Chief Minister of Delhi Arvind Kejriwal announced that a 13-member committee of lawyers would be set up to create the grounds for such recommendations on the utilization of the Rs. 50 crores earmarked for the Advocates Welfare Fund by the Aam Aadmi Party (AAP) government.

The Committee had then proposed rolling out Group (Term) Insurance, Group Medi-Claim, e-library and creche for advocates in Delhi towards the utilization of the Chief Minister’s Advocates Welfare Scheme.

[COVID 19]: 76 Cases Registered In Pune Against Offenders Under Section 188 of IPC