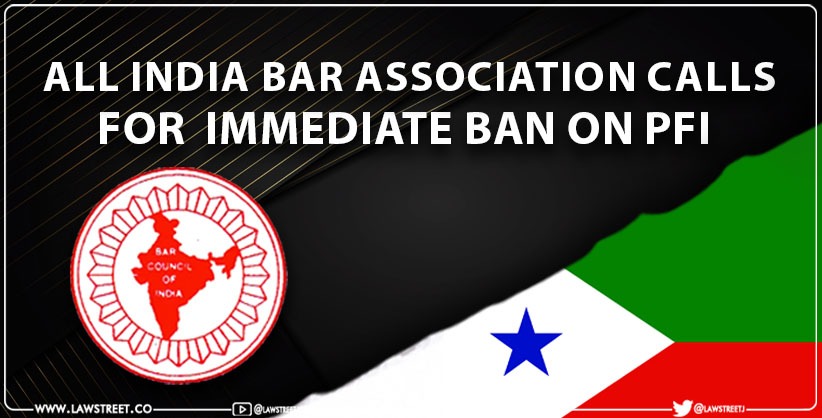 NEW DELHI: All India Bar Association (AIBA) has sought ban on the Popular Front of India (PFI) in the face for its alleged involvement in terror activities after law enforcement agencies conducted searches against it at 93 locations across 15 states and arrested hundreds of its activists on various charges.

In a letter to Home Minister Amit Shah said, Dr Adish C Aggarwala, Senior Advocate and Chairman of AIBA said, "This is the right time to ban this organization as nobody should be allowed to be involved in activities directed against the integrity and sovereignty of India. It is clear that the PFI, its leaders and members were involved in violent protests in different parts of the country against the Citizenship (Amendment) Act, forced conversions, radicalisation of Muslim youths, money laundering and links with banned groups".

He said India is a secular country and no one can be permitted to destroy the secular fabric of India.

"The criminal and violent acts carried out by the PFI over a period of time – such as the chopping off the hand of a college professor in Kerala, cold-blooded killings of people linked with organisations espousing other faiths, collection of explosives to target prominent people and places, support to Islamic State and destruction of public property -- have had a demonstrative effect of striking terror in the minds of the citizens," he added.

Dr Aggarwala, who held posts of Vice Chairman of Bar Council of India and Vice President of Supreme Court Bar Association, said for the now-vibrant Bharat, Covid-19 pandemic was an Agni Pariksha. Thanks to the strong fundamentals and a resolute political-executive leadership, the nation demonstrated its innate strength and led the comity of nations with its own set of vaccines and vaccination campaigns.

Post-pandemic, while European and the Americas’ economies are wobbling, and many Asian nations, including our rogue-neighbours are teetering around collapse, India is standing tall and is surging ahead.

While the nation is picking up momentum and registering growth in manufacture, exports and other related gains, forces inimical to our growth are resorting to extremism and sabotage to halt our progress, growth and development, he said.

The AIBA called upon the Union Home Ministry to do the following expeditiously:

1. Centre should ban PFI without any delay.

2. More such arrests should be made without fail so all terrorist possibilities could be rooted out.

3. NIA should gather all relevant information quickly and lay the chargesheet without any delay.

4. NIA should stay active in courts and ensure that none of the arrested top rung leaders of PFI get bail from any court.

6. Centre should urge the Supreme Court to disallow courts below from entertaining any cases relating to the PFI.

7. NIA should commence trial and secure conviction of PFI leaders and activists 100%. Any acquittal should be analysed threadbare and any possible loophole on prosecution side should be plugged.