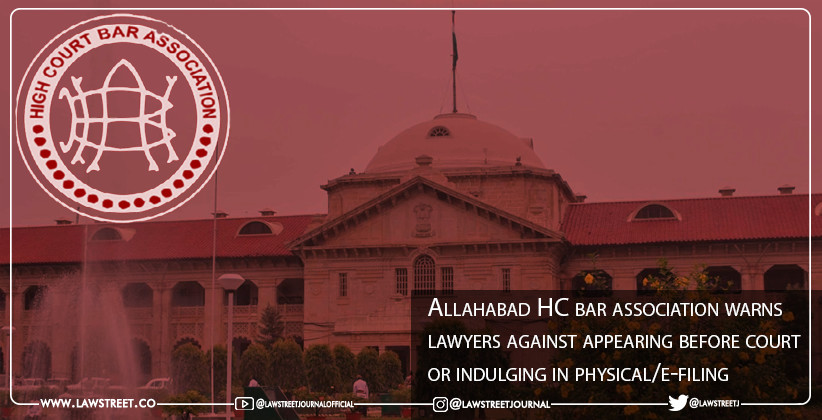 Legal Insiders Mar 03, 2021 Aditi Aggarwal ( Editor: Ekta Joshi ) 6 Shares
6 Shares
The Allahabad HC Bar Association has issued an official order dated 1 March 2021 asking Advocates associated with HCBA (High Court Bar Association), not to indulge in Physical or E-filing keeping in view the importance of ongoing protest against Uttar Pradesh Education Tribunal Act 2021. It is also stated in the order that strict action will be taken against Advocates who indulge in physical/e-filing.

Further, HCBA has also informed through the official order that it has resolved to abstain from Judicial Work on 2nd March 2021 till 12 pm to express its displeasure over the passing of Uttar Pradesh Educational Services Tribunal Bill, 2021.

It has been stated that if any Advocate is found appearing before any Bench of the Allahabad High Court, then HCBA would write to the Bar Council of Uttar Pradesh to terminate his/her enrolment/registration. It also mentioned that the Association has terminated the membership of an Advocate who reportedly sent an e-petition to the Chief Justice of Allahabad High Court. Background:

There has been a controversy around ‘UP Education Service Tribunal Bifurcation’ since few days, wherein the HCBA, Allahabad has been abstaining from court work since February 23. A similar bill (related to Education Tribunal) was introduced in the year 2019 by the UP Government but after facing stiff opposition from the Lawyers, the Government decided to take back the said Bill from the Government of India and incorporate certain amendments desired in it. Government has now introduced a new Bill in place, i.e. The Uttar Pradesh Education Services Tribunal Bill 2021.

It had stated on its 23 Febraury resolution that the establishment of Principal Bench of Tribunal at Lucknow is against the guidelines issued by the Supreme Court and that the advocates practicing at Allahabad High Court are unhappy with the decision.

The Association has been expressing its displeasure over the way in which the Bill was brought about by the State Government in the backdrop that Deputy CM of Uttar Pradesh Dinesh Sharma even after accepting the demands of the Advocates of Allahabad and assuring them publicly that the Principal Bench of the tribunal would be established at Allahabad/Prayagraj, the Government went ahead with the Bill which is against the well-settled principles propounded by the Supreme Court.

In conversation with the online news platform Live Law, Honorary Secretary of HCBA, Allahabad,  Prabha Shankar Mishra has said that the strike is likely to continue till 9th March, the day on which Allahabad Bandi will be observed He also informed that Association has decided not to meet Government functionaries.