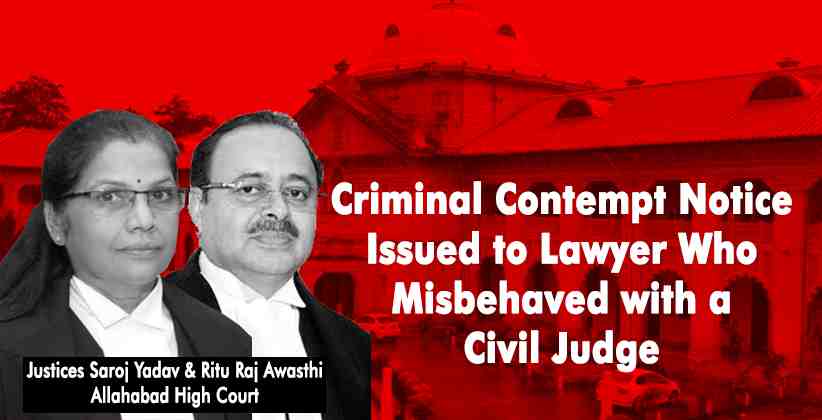 It was alleged that the Advocate misbehaved with the Presiding Officer and used abusive language, created obstructions, and manhandled the Court as well as tore, snatched, and threw the order and ended up terrorizing and pressurizing the Court. It was further alleged that he did not let the Court to function, defamed the Court by making serious allegations of taking money and giving the judgment. The Advocate brought down the dignity of the Court in the public domain and weakened the authority of the Court. As per the High Court’s order, it was noted that “the allegations made in the complaint dated 6.11.2020 are very serious in nature”. The court issued a notice to Vijay Kumar Pandey, Advocate through Chief Judicial Magistrate, Pratapgarh. The next hearing will be held on 7 December 2020. On this day, Advocate Vijay Kumar Pandey is ordered by the Court to remain personally present before the High Court. The Court also issued a notice to him, after going through the official report submitted by the Registry dated 9.11.2020.

Earlier, a complaint regarding this misconduct by Advocate Vijay Kumar Pandey was also made by Varnika Shukla, Civil Judge (Junior Division), Sadar, Pratapgarh. Therefore, this case was registered as Criminal Contempt and came before the Court under the orders of Chief Justice.   [READ ORDER]