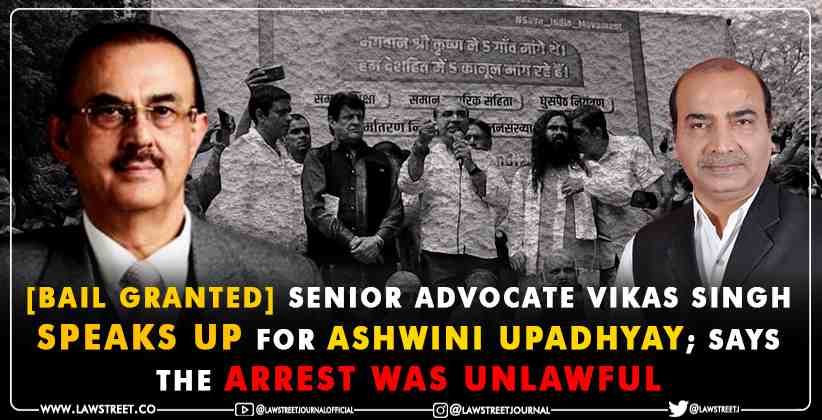 Senior Advocate Vikas Singh in exclusive conversation with LawStreet Journal stated that Ashwini Upadhyay’s arrest was unlawful. Upadhyay was arrested in relation to the communal sloganeering at Jantar Mantar on 8th August and was put in a judicial custody for two days.

Upadhyay’s bail application was heard in the court today where he was represented by Senior Advocates Vikas Singh, Sidharth Luthra, Pradeep Rai, and Gopal Sankarnarayanan.

“I always work pro-bono for him because I believe there is at least one person who brings up important matters in the court,” added Singh.

Singh argued that the people making hate speech in the video are clearly identifiable. The police should go an arrest them but instead they are arresting Upadhyay.

Section 153(A) of the Indian Penal code has been charged against Upadhyay. It is the only unbailable charge that has been pressed against him. However, Police still doesn’t have evidence to prove that Upadhyay was present when such slogans were made.

Upadhyay claimed that he left the event at 12 p.m. Singh explained that the video recorded was around 4 p.m. or later as that is when the rain stopped, and aftermath of rain can be seen in the video. Singh further argued that it is effortless for police to find out the location of Upadhyay’s phone around 4 p.m. to confirm that he was there or not.

“Will the police be so irresponsible to arrest someone without even proper investigation?” said Singh.

Upadhyay himself filed a complaint to the Police saying he is not associated with people in the video and strict actions be taken against them. The FIR has been filed against unknown persons, but Upadhyay has been arrested and not those who were sloganeering. Singh argued Police has no basis to prove that Upadhyay is linked to the slogans and the people saying them in anyway.

Singh said people making such slogans should be punished accordingly. But punishing innocent people like Ashwini Upadhyay is wrong.
Singh also said that such an unlawful arrest will hurt and send a bad message to people like Upadhyay who work selflessly for the betterment of this nation.