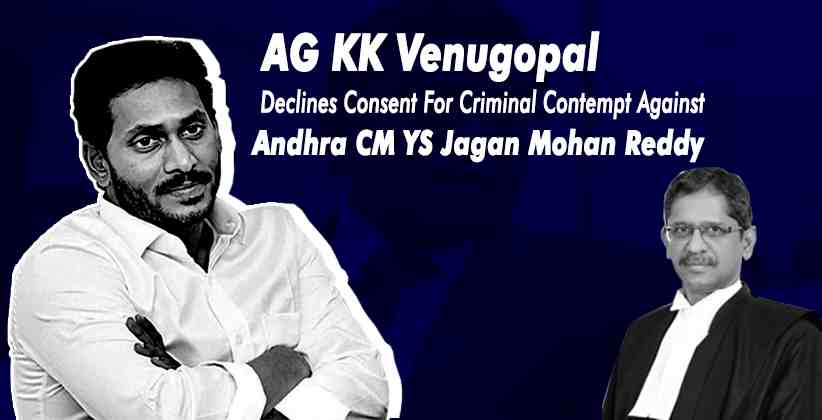 As per the Attorney General, the conduct of the Andhra Pradesh Chief Minister and his adviser was “prima facie contumacious” but as the Chief Justice of India is “seized of the matter” it won’t be appropriate for him to deal with the same.

BJP leader and lawyer, Ashwini Upadhyay filed the application seeking the attorney general’s consent to initiate contempt. In his reply to Upadhyay, Attorney General said, after noting that Jagan Mohan Reddy was facing criminal prosecution in 31 cases, “I am of the opinion that the timing itself of the letter as well as it being placed in the public domain through a press conference could certainly be said to be a suspect, in the background of the order passed by Justice Ramana dated 16.09.2020, directing pending prosecution of elected representatives to be disposed of expeditiously”.

The AG further said that,

“In this background, prima facie, the conduct of the said person is contumacious. However, what has to be noted is that the entire case of contempt arises out of the letter dated 06.10.2020 written by the Chief Minister directly to the Chief Justice of India and the subsequent press conference held by Sh. Kellam. The Chief Justice of India is seized of the matter. Hence, it would not be appropriate for me to deal with the matter.”

Upadhyay stated the following in his letter,

“It has been two weeks since the release of the letter in the public domain, and as yet, suo-moto contempt action initiated by the Hon’ble Supreme Court of India. As a responsible advocate of this Court and a servant of justice, I would be failing in my duty if I allowed things to remain as they are”.

Ashwini Upadhyay, who is also the petitioner in the PIL seeking expeditious trial of cases against MPs/MLAs, stated that he has many reasons to believe that Andhra CM Jagan Mohan Reddy’s unprecedented action was just a response to the order passed by a bench headed by Justice Ramana on September 16 to fast-track the criminal trial against legislators. He further added that Jagan Mohan Reddy is facing numerous criminal cases for corruption and disproportionate assets. As per the Supreme Court’s direction, the High Court has passed directions to commence the day-to-day trial of cases against MLAs.

According to Patiala, this prompted the chief minister of Andhra Pradesh to write a letter to the Chief Justice with allegations against Justice NV Ramana,

“..the effect of this release to the public is to undermine the efforts that the Supreme Court bench headed by Justice Ramana is taken to ensure that trials against MPs/MLAs (including Shri YSJ Reddy) are expedited.” He further stated in his petition that the letter which was sent by Jagan Mohan Reddy to the Chief Justice of India on October 6 is “scurrilous in nature and wholly attempts to interfere with the independence of the judiciary”.

Ajeya Kellam IAS, the Principal Advisor to the Andhra CM Jagan Mohan Reddy, convened a press meeting on October 10 to release the contents of the letter to the media. In this regard, Upadhyay stated the following in the petition,

“The audacious assault by the Chief Minister and Shri Kellam on the judiciary of the country is without precedent. The timing of the letter, the contents of the same, the rush to spill it to the public while the matter was pending with the Chief Justice and the separate statement read out by Sri Kellam make it manifestly clear that this was done to interfere with the course of justice and lower the 30 of the court.”

He further stated that the complaint is a direct attack on a sitting judge who is next in the line to be the Chief Justice of India. On October 6, the Andhra Pradesh Chief Minister Jagan Mohan Reddy sent a complaint to the Chief Justice of India, alleging that certain judges of the High Court of Andhra Pradesh were biased towards the main opposition party in the state, the Telugu Desam Party. Reddy requested the Chief Justice of India to look into the matter and consider initiating steps “as may be considered fit and proper to ensure all other state judiciary’s neutrality is maintained”. There is a total of two petitions which have been filed in the Supreme Court which seeks action against Jagan Mohan Reddy for his move against judges. Bar Council of India, Supreme Court Bar Association, and the Supreme Court Advocates on Record Association have many resolutions condemning the actions of the Andhra Pradesh CM.

Senior Advocate Dushyant Dave, President of the SCBA, termed that the SCBC resolution was “premature” and said that an inquiry was required to find out the truthfulness of the allegations. Taking such a stand, Dave rescued from the meeting of the SCBA Executive Committee which discussed the resolution.