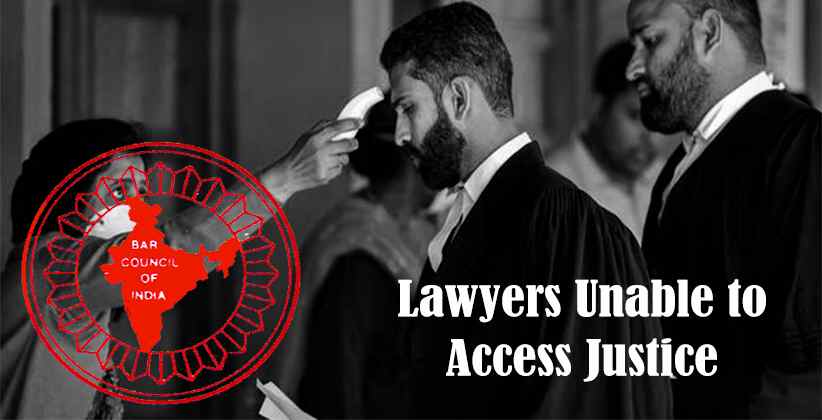 In showing concern about the lockdown confining the access of hearings only to some privileged lawyers who have contacts and selective high positioned law firms, the Bar Council of India issued a Press Release dated 20th May 2020 addressing key issues surrounding the matter.

In view of this, it has determined to take advice from advocates from the Supreme Court, High Courts and District Courts on restoring normal court hearings as the use to technology in court trials has problems like internet connection issues and is allowing very limited functioning of the Courts because of the lockdown measures that have been in place since 23rd March 2020. This seems to have put a threat to the sanctity of the legal profession.

The Bar Council issued a statement on 20th March 2020 and brought to notice of the public that it has received several complaints and concerns from Lawyers regarding the virtual hearings.

It also mentioned that the video conferencing proceedings accounts for disturbances due to poor connectivity or other technical glitches and that the hearing of cases is done on a 'pick and choose' basis in many High Courts. This has also raised complaints on the functioning of Courts amid the COVID-19 induced lockdown.

"In the opinion of some of the biggest Bar Associations and several advocates of Supreme Court and High Courts, some people are trying to take undue advantage of lockdown (and almost closure of Courts) and the legal profession is gradually being attempted to be hijacked by a few blessed lawyers and selected law-firms who have high-level connections."

The Bar also noted concerns over lack of transparency in court proceedings. It said:

"The public of the country, as well as the Advocates, are in the dark about what is transpiring in the Courts on account of the virtual hearings and the Courts cannot shut their eyes to this issue."

The Press Release from Bar Council of India also mentions that the Chief Justice of India and the Chief Justices of High Courts would have to be informed that resolution to the mode of hearing made without taking the Bar into consideration and will not be able to succeed.

On account of the above issues, the Bar has determined that it is to hold an 'Opinion Poll' on the issue with confidence of the State Bar Councils and the Bar Associations.

The Bar Council of India also asked for reports by the State Bar Councils, which are anticipated to comprise of a proposal of the necessary steps that could be taken by the Courts to make sure that all stakeholders are safe.

"The Council will make desirable request and submit appropriate demand to the Hon'ble Chief Justice of India after discussing the reports to be received from State Bar Councils and Bar Associations."

The Bar Council is of the view that it would ask the Chairman of the e-committee, Justice DY Chandrachud to direct the concerned authorities to make allowances for extra links for the hearings thus making sure that all the advocates involved in the matter get to engage in the proceedings. As of late, only two links are being provided.

Other than the aforementioned, the Bar Council’s statement also mentioned that it has decided to ask the Prime Minister and the Chief Ministers of different States again to give some aid to needy advocates during this time of financial crisis and to help them rise from the professional loss they have suffered and will continue to suffer due to the coronavirus.

The Bar mentioned that along with the State Bar Councils, it has provided maximum aid that they could, to make up for the financial crisis, but their resources have fallen short and hence Government's intervention is necessary at this juncture to help lawyers who are desperately in need of some aid.