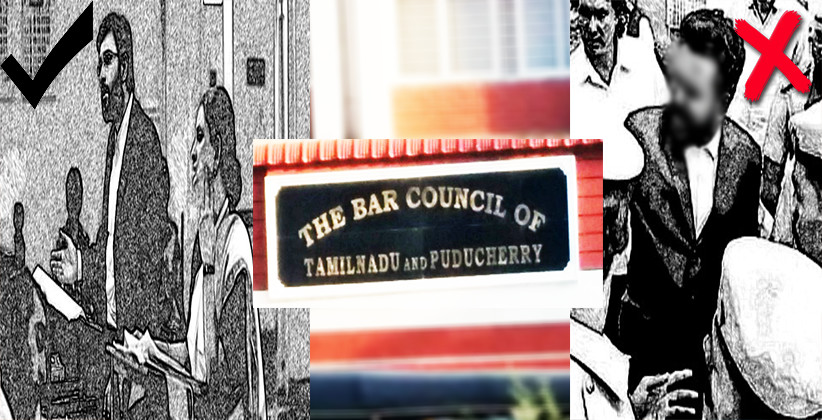 The enrolment committee of Bar Council of Tamil Nadu at Chennai on April 30, 2019, in the case of The Inspector, K.K. Nagar Police Station v. Nandhakumar and Ors., reprimanded the lawyers who barged into a police station saying that lawyers should argue in courts, not in police stations.

The Committee comprising of senior counsel R. Singaravelan and N. Chandrasekhar was hearing a complaint filed by the Inspector of K.K. Nagar police station in Chennai against two advocates for having reportedly stormed into the station along with others on November 19, 2018.

The group entered into a heated argument with the policemen over their reluctance to file a criminal complaint in connection with a scuffle between a shop owner and a money lender.

The police have also registered an FIR in the case.

The Disciplinary Committee taking a serious note of the incident observed that “The lawyer is meant for guiding the law and the police is meant for implementing the law. When both fight with each other the implementation of law will be a helpless child crying between the fighting father and mother.

…Being the advocates, the respondents have no authority in law to enter the police station with a group of persons alleged to be advocates. The advocates of noble profession are expected to maintain their dignity not only in the Court room but also in the society.

On perusal of the complaint, the Committee noted that there was no concrete evidence to establish that advocates alone were responsible for disturbing the peaceful atmosphere at the police station on the day of the incident.

However, before disposing the matter, the Committee observed that the general friction between lawyers and policemen in such matters could be eased to some extent, if the police were more proactive in responding to complaints made by aggrieved persons.

“While we hold unhesitatingly that the respondents have no authority in law to enter into the police station with such a huge crowd and pick up a wordy quarrel with the police, we also point out that such an incident would have been avoided by the police official by receiving a complaint and giving CSR Number to the complainant stating that they would take appropriate legal action on their complaint soon,” the Committee said.

Further, the Disciplinary Committee also suggested that complaints related to matrimonial disputes, property disputes and other criminally tainted civil disputes could be entrusted to Tamil Nadu Legal Aid Board. This will not only reduce the burden of the police officials who deal with real criminals and anti-social elements, but also bring reputation and utmost confidence to the public on the police station and justice delivery system. Further, huge filing of cases and the considerable consumption of time in disposal of FIR and criminal case will be shown their exit by the above entrustment to the legal Aid board, the Committee said.