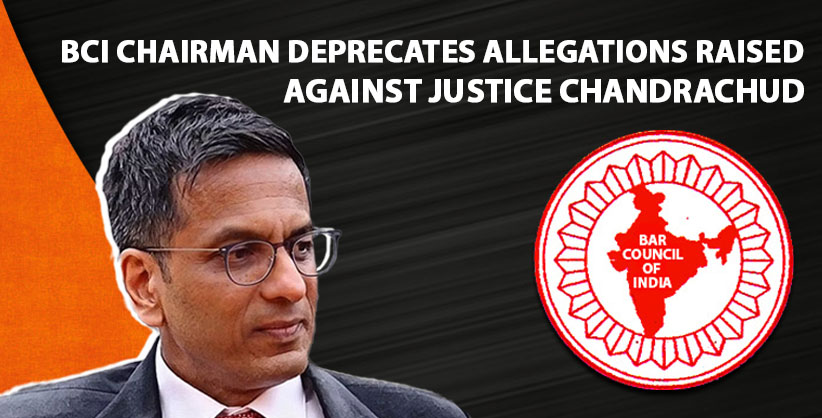 NEW DELHI: The Bar Council of India has strongly deprecated "malicious attempt" being made to raise "baseless allegations" against the senior most Supreme Court judge Justice D Y Chandrachud on the eve of his recommendation to be the Chief Justice of India.

"The country and the Indian Bar has complete faith in Dr Justice D Y Chandrachud. Justice Chandrachud is an asset for the world’s judiciary and is known for his knowledge, honestly and integrity; but, surprisingly even such popular judges are being attacked," BCI chairman Manan Kumar Mishra rued.

In a press release, he said the Bar Council of India has thoroughly examined the contents of this 165-page long letter by one R K Pathan and finds that it is nothing but a scurrilous and malicious attempt to interfere with the functioning of judiciary and the administration of justice.

Pathan claiming to be the President of some so called “Supreme Court and High Court Litigant Association” is stated to have lodged a complaint...Surprisingly no details of Pathan is furnished in the complaint. This act of Pathan is nothing, but, a deliberate attempt to malign our Indian Judiciary in the eyes of the world, he said.

Mishra informed that the State Bar Council of Maharashtra and Goa and the Bar Council of India would investigate into such nefarious conducts of these handful of advocates of Mumbai and appropriate action would be taken, so that in future no one could dare to commit such mischief.

"Indian Bar cannot tolerate any such nonsense act of anybody. The timing of complaint clearly exposes the malicious purpose behind it," he claimed.

"The modus of some people with vested interests for their unsuccessful attempt to tarnish the image of our Supreme court and/or its judges. Such growing tendency is really a matter of serious concern for the country and it has to be checked anyhow," he pointed out.

Mishra said as per information, Pathan (Rashid Khan Pathan) was in April, 2020, in a Suo-Moto Contempt Petition, was found guilty by the Supreme Court for filing false, and baseless complaints against a judge of Supreme court (now retired). The Supreme Court observed the complaints to be scandalous. Bar Council of India has been informed that alongwith this man, two other Advocates were also held guilty for contempt for their connivance with this man and all the three were sentenced to three months simple imprisonment, he pointed out.

The BCI chairman said the letter by Pathan is nothing, but a device to gain cheap popularity. The allegations by Pathan cited two instances of Justice Chandrachud dealing with matters one in which his son had appeared as advocate before the Bombay High Court and another related to Covid-19 vaccination.

"This man has also defamed the litigants-mass of our country. This is also very sad. Such persons deserve strong penal and disciplinary action," he said, adding These people have not even spared the son of Justice Chandrachud. It is really very shocking.

Plea Against EVMs Raised In Abstract Must Be Deterred: Supreme Court [Read Plea]