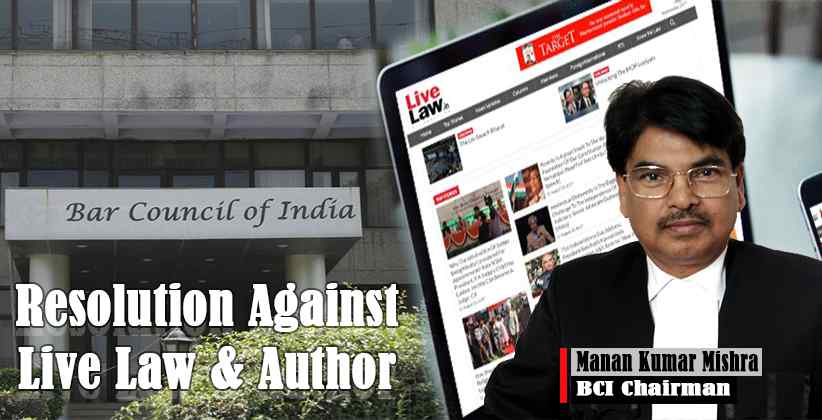 Bar Council of India (BCI) has passed a unanimous resolution in its General Council Meeting held through Video-Conference June 03, 2020, against Live Law and Vikas Bhadauria who had written column article titled “Manan Kumar Mishra’s Personal & Political Battles Using BCI Chairman's Office”, which was published on June 01, 2020, in the news website of Live Law. Press release to this effect was issued on June 04, 2020.

BCI had termed it “reckless and motivated story” and observed that “malicious, mischievous, derogatory and baseless imputations” had been made against Mr. Manan Kumar Mishra, Chairman, Bar Council of India. Writing about Live Law, it was held that it was appalling to note that “Live Law” had allowed its platform to be used for a defamatory story prompted by ill-will and malice to make personal allegations against Mr. Mishra.

BCI resolution had not only held it as a brazen attack on the Chairman but on the Bar Council of India as an Institution. Regarding Mr. Manan Kumar Mishra, it was observed that ever since he was elected as Chairman of BCI, he has been relentlessly espousing and fighting for the cause of Advocates' fraternity in the country and he had never misused his position for any personal political benefit.

Mr. Manan Kumar Mishra had been unanimously elected Chairman of the Bar Council of India for the 5th consecutive term on December 12, 2019.

Regarding BCI, it was observed that BCI had always risen to the occasion whenever any unscrupulous, misguided, and motivated element attempted to weaken and damage the institution of the Judiciary and the Bar. A few days back, BCI had reacted strongly when senior advocates and retired Judges had criticized the Supreme Court for not taking prompt action regarding the migrant crisis. In the press release, it was observed that they were trying to “browbeat and weaken the judiciary in the Country”. In that regard, the press release was also issued which was unanimously ratified by the Members of BCI. The objection of the BCI was about the wrong impression created by the writer (Vikas Bhadauria), by conveying to the public at large that it was without the concurrence of the Members of Bar Council of India.

Regarding the article and author, the press release notes that,

“The said author has done cherry-picking to suit his false story and has made reference to selective portions of certain statements and communications of Mr. Manan Kumar Mishra without giving full text and proper purport which has always been to advance the cause of the bar. The story by Mr. Vikas Bhadauria is only a scandal-mongering and vilification campaign against Mr. Manan Kumar Mishra and we resolve to condemn and reject it with all contempt it deserves.”

The BCI had also resolved to make a complaint to the Ministry of Information and Broadcasting against the author Vikas Bhadauria and the news portal “Live Law”, which in BCI’s word was “acts of misreporting, omission and commission, which are nothing short of yellow journalism and a scar on ideal and honest activities of the Media/Press.”

The BCI has also decided to lodge a criminal case for defamation and/or suit for damages in the next meeting/s. The agenda of the meeting was presided over by Mr. Satish A. Deshmukh, the Vice-Chairman of BCI as the was matter related to Mr. Manan Kumar Mishra, Mr. Mishra had requested the Vice-Chairman to preside over the meeting.

The Bar Council of India is a statutory body that was established by Parliament under the Advocates Act, 1961, to regulate and represent the Indian bar. It performs the regulatory function by prescribing standards of professional conduct and etiquette and by exercising disciplinary jurisdiction over the bar. It also sets standards for legal education and grants recognition to Universities whose degree in law will serve as qualification for enrolment as an advocate.

Mr. Mishra was first elected as BCI Chairman in April 2012. In 2014, after his term expired, BCI Member from Rajasthan Biri Singh Sinsinwar was elected the Chairman. However, Sinsinwar resigned from the post, and Mishra was again re-elected as Chairman. Since then he continues to hold the position of Chairman of BCI.