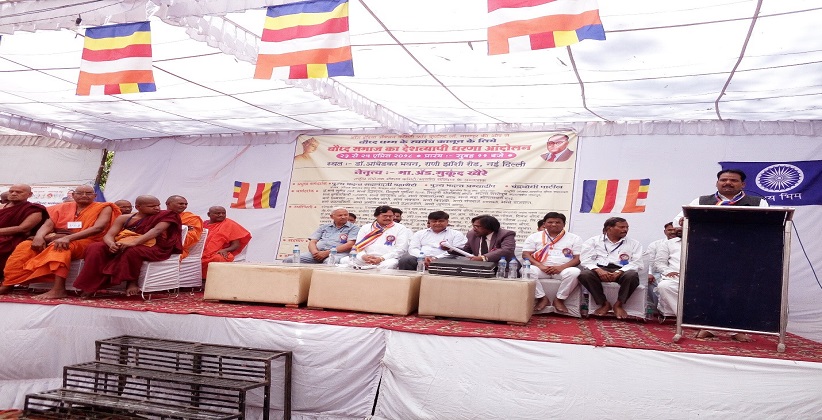 India is a democratic and secular country. It is a land which has embraced people with multiple faiths. Many prominent people have endeavored to spread prosperity in the nation. However, some social differences still prevail in the society over caste or class.

After witnessing multiple mass agitations of Patel, Jat, and Lingayat, etc. for seeking reservations for their respective castes, which not only took many lives but destroyed public and private properties as well. The Buddhist community has now also raised their voice with regard to seeking a separate Buddhist law to establish their separate identity in the society.

All India Action Committee for Buddhist Law under the directions of its National President, Advocate Mukund Khaire, initiated a three-day agitation at Dr. Ambedkar Bhawan, New Delhi from April 23. A large gathering of Buddhists from 10 different states including their religious leaders joined the movement.

On the second day of the agitation, in the presence of Mr. Rajendra Pal Gautam, Minister of Social Welfare, Government of Delhi, Advocate Mukund Khaire said that he discussed with Delhi Minister about the extreme need of Buddhist law for their recognition, and he has agreed that he will put forth before the government their demand for a special law pertaining to Buddhists. He further said, "It’s been more than 60 years, but no Buddhist law has been made by the government which is their Constitutional duty. We are submitting a bill to the minister seeking Buddhist law as Delhi government has accepted our proposal. In this regard, Central Government will also have to listen to us. Until we get our law passed, we won't remain silent."

Speaking further about their community's issues, Khaire said that they don't have any separate cremation centers because of which they need to go to Hindu crematoriums. For this, they have demanded that in Buddhist areas, we should be given a space for our own separate crematorium. He also said, "Lingayat samaj in Karnataka has also got their own law after they denied to follow the faith of Lord Brahma and as such, they affirm of not belonging to Hindu Law at all."

While addressing the media and Buddhist congregation, Mr. Rajendra Pal Gautam, Minister of Social Welfare, said, "As we are agitating for a separate law, this should be a shame for the Central Government as this is their responsibility. So many atrocities have been faced by us as Buddhists, we are the ones who remained slaves since last 4000 years."

He further stated, "In 2011, it was the first time that in religion section it was written Hindu otherwise before that it was written untouchables. Our 99% people are those who are earning not more than 15,000 per month, resulting they are unable to send their children in good private schools, and the condition of government schools all over the country is worst. Our children could not prosper in academics which further makes it challenging in getting admissions in colleges and seeking job opportunities in reputable organizations."
In the end, he also said that a large number of Buddhist young men are languishing in jails in numerous fake cases and we will seek the release of those people.

The Committee President Advocate Khaire has also indicated that if the center does not accept their proposal for creating a separate law till April 25, 2018, then from April 26, thousands of people will sit on indefinite hunger strike.