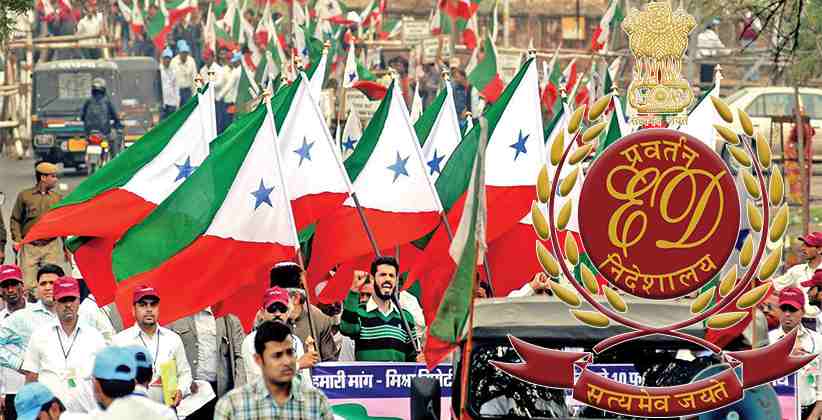 A report of the Enforcement Directorate (ED) which was sent to the Ministry of Home Affairs (MHA) yesterday (January 29, 2020) has widened the anti-CAA protest narrative as the report alleged that Kerala-based organisation Popular Front of India (PFI) formed as a successor to National Development Front (NDF) in 2006 has funded protests against Citizenship (Amendment) Act, 2019 (CAA) and National Register of Citizens (NRC) across the country and a month-long protest in Shaheen Bagh.

The ED in the report which was submitted to the Ministry of Home Affairs has also alleged the senior congress leader Kapil Sibal including senior lawyers Indira Jaising and Dushyant Dave, among others, have been paid by the “extremist organisation”. The report in furtherance makes no mention of these payments being in relation to protests against CAA.

After the findings of the report, Sibal asserted the fact of not denying receiving funds from PFI but he devises that it was for professional purposes. Jaising completely denied the purported allegations. Despite multiple calls, Dave have not responded to the allegations.

“The scrutiny of deposits and withdrawals from bank accounts of PFI and its related entities has revealed there is a direct correlation between dates of deposit/withdrawal of money from the bank accounts and dates of demonstration against CAA in different parts of the country,” a part of the report, titled ‘Summary of evidences proving that PFI has mobilised cash for organising demonstration against CAA’, says.

In another part of the report titled ‘Analysis of Bank Accounts of PFI’, it is purported that the organisation received Rs. 120.5 crores, which was withdrawn either the same day or within two or three days. This part of the report, which does not mention the time period in which this money was received, alleges that scrutiny of a PFI account with Syndicate Bank’s branch on Moovar Road in Kozhikode, Kerala, revealed that payments in the amount of Rs. 3.77 crores were made to various individuals and persons. This, ED states, includes paments to Sibal (Rs. 77 lakh), Jaising (Rs. 4 lakh), Dave (Rs. 11 lakh), PFI Kashmir (Rs. 1.65 crore), New Jyothi Group (Rs. 1.17 crore), and one Abdul Samad (Rs. 3.10 lakh), an accused chargesheeted by NIA.

Senior lawyer and congressmen Kapil Sibal said to the Indian Express: “I have received funds for professional services rendered in the Hadia case in 2017-18…. I appeared (in the case) on seven occasions. I sent my bill to the advocate on record, and that was paid. What has that got to do with any protests or anything?”

He also gave details of each cheque received from PFI, dated between July 2017 and March 2018, to drive home the point that the payments were made much before the Citizenship Bill, 2019 (CAB) was even brought in Parliament.

Jaising has in a written statement expounded: “I completely and vehemently deny having received any money from PFI at any point of time, or receiving any money from any person of organisation in relation to anti-CAA protests. The note showing details of transaction from the PFI account alleged to be made to me does not contain any signature or date nor does it contain the name of the agency from where it has originated, and therefore is wholly unreliable.”

In a statement, PFI general secretary Mohammed Ali Jinnah denied any financial link between the organisation and anti-CAA protests. He also said affirmatively that the payments shown against the name of Sibal, Dave and Jaising were made in connection with the Hadia case, and were publicly declared.

Notably, ED has been probing PFI since 2018 with regard to a case of money laundering on several occasions. Recently, after receiving a report on PFI’s alleged involvement in CAA and NRC protests by the UP Police, MHA had asked ED to probe its finances.