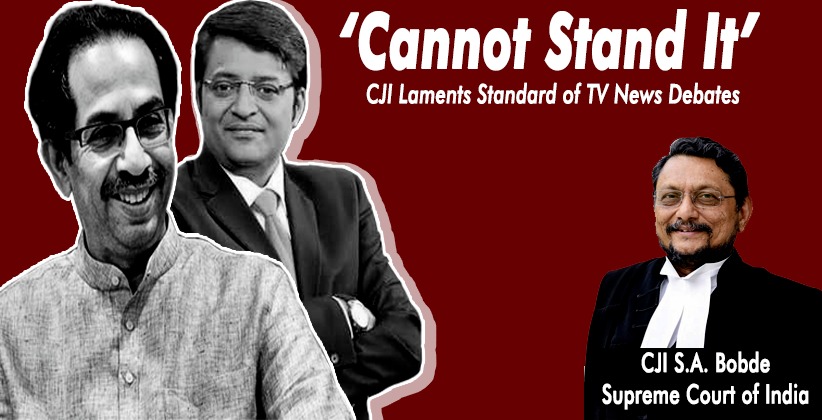 An appeal was filed by the Maharashtra government challenging a stay order on an investigation against Goswami in criminal cases lodged against him for allegedly spreading social disharmony.

With respect to this appeal, Justice Bobde said that it was the court’s duty to ensure peace in society. It was heard by a three-judge bench.

On Monday (26th October 2020), Arnab Goswami’s lawyer was told by Chief Justice of India SA Bobde that he could not stand the level to which the prime-time news channel debates had descended and wondered where that had left public discourse in the country.

He said, “Frankly speaking, I cannot stand it. This has never been part of our public discourse,” he said about the high-decibel television debates. It is seen that “Frankly speaking” is also the title of a show presented by Arnab Goswami.

An appeal was filed by the Maharashtra government against an order dated 30th June passed by the Bombay high court staying the investigation into two FIRs which named Goswami and other members of his channel, Republic TV.

Senior advocate Harish Salve was appearing for Arnab Goswami. In his statement, he said the FIR was politically motivated as it targeted the news anchor and his channel for raising questions over the silence of Congress chief Sonia Gandhi and her party over the killing of two Hindu seers by a mob in Palghar in April.

Salve said, “At best, these individuals can file defamation but where is the question of charging them under Section 153A which is inciting disharmony.”

The High Court order had noted this fact and said that “It is quite clear that the object of or the target of the petitioner’s attack was primarily Sonia Gandhi and the Congress party. There was no mentioning of either the Muslim or Christian community. It would be too far-fetched to say that the two religious communities were involved in the debate.”

The bench also consisted of Justice DY Chandrachud and Justice LN Rao. It was said by them that they were more concerned about peace and harmony in this country. They further added that nobody is immune from being questioned they could ensure that the questioning done by the police was done in keeping his right to dignity. However, they want an assurance of a sense of responsibility from Goswami.

Salve replied to this saying, “Responsible journalism is covering sensitive cases without sensationalizing.” But he also agreed that there was too much noise in television debates which made the court say that it was better to remain old fashioned.

The bench said it was concerned as every new day, there was a new conflict between the state and Goswami’s channel. The court allowed Salve to file an affidavit mentioning further developments since the high court stay on the investigation.

A question was raised by the Maharashtra Government as to why Goswami should get treatment distinct from that given to any other citizen as the high court even stalled the investigation into the two FIRs in relation to the Palghar incident. The bench replied, “While nobody is above the law, some are targeted with greater intensity. Some people thus need additional protection.”

In matters like this, the bench adopted a “conciliatory” approach and asked the state to produce a list of all cases being investigated against Goswami and his channel in two weeks.

Senior advocate Abhishek Manu Singhvi was appearing for the state. He said that the high court stay on the investigation must go and also added that he was willing to give an undertaking that there shall be no arrest, and summons for appearance will provide a time gap of 48 hours and no questioning will be conducted during night time.