Home Legal Insiders "Will Chief Minister be Arrested if a Person Names him in a Suicide Note for Not Paying Salary?": Salve Argues for Arnab Goswami
Legal Insiders 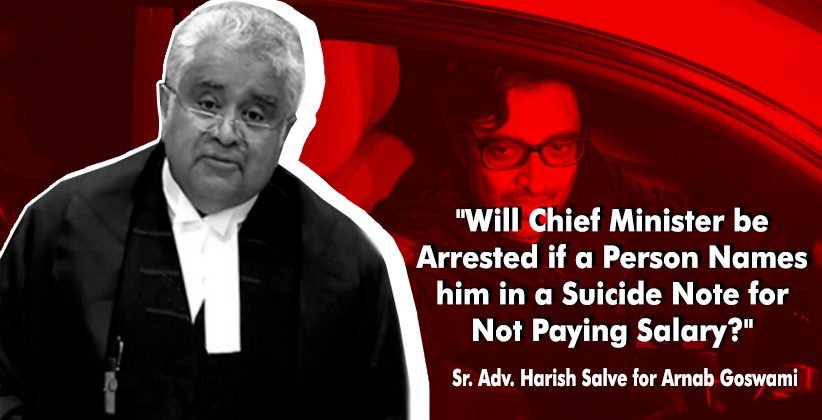 Senior Advocate Harish Salve opened his arguments by explaining the chain of events from the registration of FIRs against Arnab Goswami, over his reporting of the Palghar lynching and the threat issued by Shiv Sena to cable operators to boycott Republic TV as well as the breach of privilege notice issued by the Maharashtra assembly against him. He also stated that the TRP scam FIR was used as a weapon against him.

Advocate Harish Salve told the court that the case against Arnab Goswami did not stand the test of basic ingredients required to establish an offence of Abetment to Suicide under Section 306 IPC, 1860.

The bench of Justices DY Chandrachud & Indira Banerjee is hearing the petition against the Bombay High Court order denying Arnab Goswami bail for the abetment to suicide case.

Harish Salve further questioned “Do you arrest a man in a three-year-old FIR and put him in jail on a Diwali week and then transfer him to Taloja jail with hardened criminals?"

He further submitted that the case be transferred for investigation to the CBI and interim release for his client be granted during this period.