Rs 1,00,000/- Cost Imposed On Advocate for Filing Petition Without Vakalatnama 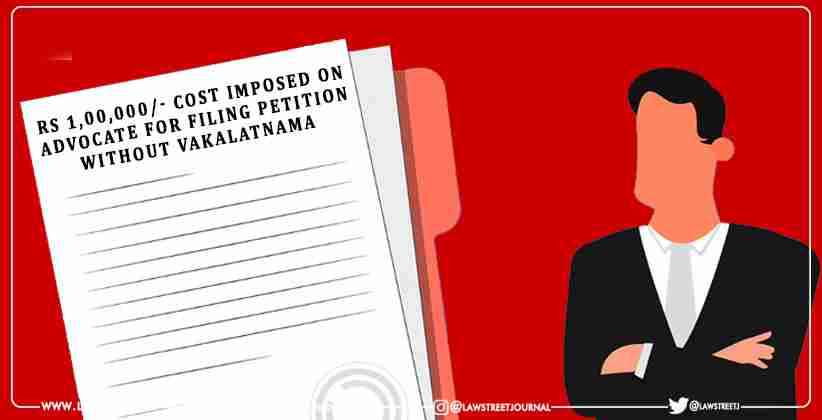 The Rajasthan High Court refused to go easy on the Advocate who repeatedly filed petitions without authorization from the Litigants. The advocate had forged signatures of the litigants on multiple occasions instead of taking their original signatures. The decision was given by the Division Bench of Justice Sandeep Mehta and Justice Vinod Kumar Bharwani. The bench upheld the Central Administrative Tribunal’s order through which a fine of ₹1 Lac was levied on the petitioner-Advocate. The petitioner-Advocate, via a writ petition had argued that the impugned order which had levied heavy cost on him, is bad in the eyes of law.

The petitioner (Advocate herein) submitted that the original contented Original Applications, at the first place, were filed by him in a bonafide manner, having been engaged as a Counsel by the Union and its Member for espousing the cause of the casual labours engaged in the Income Tax Department.

The Tribunal rejected the Original Applications in an absolutely perfunctory manner, he contended. "The observations made and the findings recorded in the impugned order that the petitioner had not been authorized to represent the Union or that he had filed a fictitious resolution in support of the Original Applications, is absolutely groundless. The direction given by the learned Tribunal imposing cost of Rs.1, 00,000/- upon the petitioner, is high handed, arbitrary and unjust and hence, the same should be quashed and set aside."

Counsel for the Income Tax Department has been in complete support of the order of the learned Tribunal. The Counsel had urged that the Court on previous multiple occasions, has already concluded that the petitioner-Advocate was not authorized by the so-called Income Tax Contingent Employee’s Union to file cases on its behalf.

The Court called the finding of ‘two documents having the same contents on which, there was a variation in signatures/ number of signatories’ ,  'very serious' and the conduct of the petitioner-Advocate, 'grave-misconduct'.  It was found out that the signatures had been forged using a Xerox machine.

In the said regard it was noted by the Court that "the finding of the learned Tribunal that the petitioner, who has been enrolled as an Advocate post retirement from the Income Tax Department, has acted as de facto party in Judicial proceedings cannot be faulted. The Tribunal also noticed interpolations in the documents filed on record by the petitioner who personally verified the pleadings. Hence, the learned Tribunal was perfectly justified in imposing cost quantified at Rs.1,00,000/- upon the petitioner for such apparent misconduct."

The Court upon being satisfied with the decision of the Tribunal, dismissed the challenge brought by the Advocate via the writ petition.