The speakers for the webinar included Retired Justice R.C. Chavan, present Vice Chairperson of Supreme Court E-Committee and Justice Gautam S. Patel, judge of the Bombay High Court. The talk was moderated by Mr. Shailesh Gandhi, former Central Information Commissioner. At the outset, Justice Gautam Patel remarks by addressing the need for immediate shift from physical hearings to the virtual courts in the wake of Covid-19 pandemic. He said "In January 2020, we didn't know what was coming our way. Then came March when everything stopped. Where we were, what we did, where we are today is a trajectory that will tell us where we go from here."

Justice Patel informed the audience about newness to the new age of virtual hearings and that he was unfamiliar how the online video platforms worked before he had to use them for virtual hearings. He also informed the audience that this new age of video conferencing and e-courts should continue unless there is some empirical evidence to show that e-courts are less efficient and proven to be more costly than physical hearings.

"In fact the empirical evidence are to the contrary that they are very costly efficient. They have other efficiencies. What is lacking and what I miss it as a judge is, there is a certain indefinable quality of not having a top notch advocate arguing in front of you. But that is a very small price to pay," he said.

He further informed the audience the Indian Judicial system needs a hybrid model of e-court governance wherein the courts and advocates will be allowed to choose the option to appear in physical hearings but there shall also be available a virtual court facility for the advocates or litigants who due to their age, distance or any other factor are unable to appear in physical courts. He further pressed upon the need of having a standardized hybrid e-court model to be adopted uniformly in all the courts across the country, especially the uniformity between High Courts and Supreme Court websites. Further he pointed out that "We must force standardization for the judiciary to follow. There has to be a standard. The software which is used, the filing protocols and HC and SC websites should also be of a standardized manner. He said that the entire search mechanism is different from court to court. There should be an inter-linked search platform where one site should give the information of all courts. He further informed the audience about the problems in implementing such standardized form of e-court mechanism and the biggest issue he raised was that of the excessive choices given to the High Courts of the country in completing judicial formalities.  He quoted that “this needs to be ruthlessly done in the interest of the litigant. Take away the problem of choice and force the change for the future." Coming to the grey areas of virtual hearings, Justice Patel informed the audience that e-courts may be of an issue in cases where the under trial accused are unable to talk to their respective advocates at the time of court proceedings and examination in courts.  He further expressed his personal happy experience in disposing of cases over video conferencing. "My clerk has just sent me the statistical data from 1st April to December 2020 and the total no of listed cases were 1948 in the Bombay HC and the total disposals were 903 which I think I would not have done in physical courts," he informed the audience. Remarks by Justice R.C. Chavan Justice Chavan began his introductory remarks by highlighting the significance of e-courts in a country as diverse and populous as India. The main argument of his introductory remark rested on the issue of pendency of cases and other practical issues faced due to physical court hearings. He also addressed the issue of consumption of large number of papers and the consequences which resulted in a ruthless exploitation of environmental resources where trees are mercilessly cut. Justice R.C. Chavan, as the Vice Chairperson of Supreme Court E-Committee informed the audience about the efforts undertaken by the committee in ensuring the adequate functioning of virtual hearings in the Covid-19 times. He relied on the significance of online e-filing and the benefits paperless courts have to offer. However, he highlighted the issue of over-crowding in the physical court by litigants, police personnel and other officers who have to appear in the courts in recording of the evidences.

He said, "I request the courts to ensure that only those persons whose presence is absolutely necessary in the court are required to appear physically. Out of the 18,000 courts, there are about 12,000 criminal courts. In these courts, at least one medical officer from our poorly manned public health service is required to appear. Who pays for this? The poor patients who are waiting for the doctor in our public health system. This is atrocious and unthinkable. Some initiatives have been taken where many doctors or surgeons are called via video calls."

Justice Chavan also highlighted the issue of over-crowding due to appearances of police machinery in courts. He said "We all will agree that our police machinery is poorly manned. We don't have enough policemen for maintaining law and order or cracking crime. We have also a lot of VIP duties for policemen, therefore half of the police force is at any given point of time already defunct. The other half who is working has to appear in courts naturally." He concluded his remarks by addressing the argument of reducing the use of papers and betterment of administrative work that must be undertaken by the judiciary more efficiently. "Reduce paper wherever it is possible. Avoid personal hearings unless absolutely necessary and push as many case types as as possible and as many stages of proceedings as possible to virtual courts. Vasundhara, the mother earth would be grateful if judicial administration takes the responsibility," he remarked.  The webinar ended on the discussion of the need of artificial intelligence in judicial administration to enhance the efficiency of justice delivery system. "Artificial intelligence is essential for the judges to be encrypted with the data and documents used in judiciary," Retired Justice Chavan remarked whereas Justice Patel said, "Artificial Intelligence allows us to intelligently schedule the cases according to their categories. It is not about predicting outcomes." 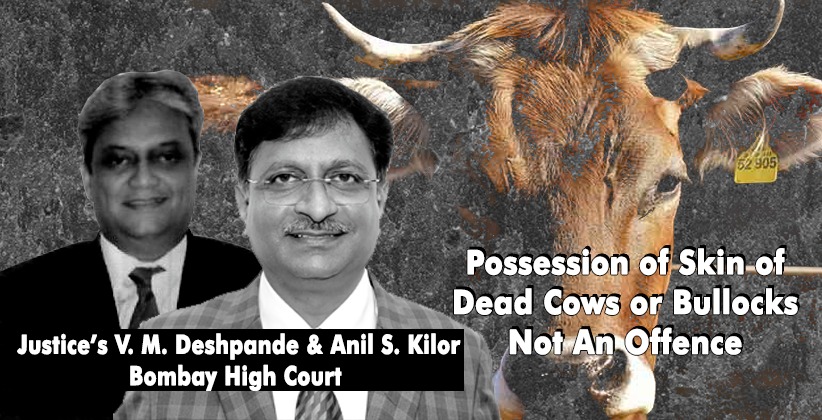 Judiciary Dec 23, 2020 Gautami Chakravarty ( Editor: Ekta Joshi ) 3 Shares
3 Shares
The Bombay High Court recently ruled that there is no prohibition for the possession of skin of dead animals and in absence of such prohibition; no offence would be made out under Maharashtra Animal Preservation Act, 1976.The bench of Justices V. M. Deshpande & Anil S. Kilor further noted that even if any circular/notification/order is issued by the State Government, prohibiting possession of skin, such circular, notification or order , then...
Read full post