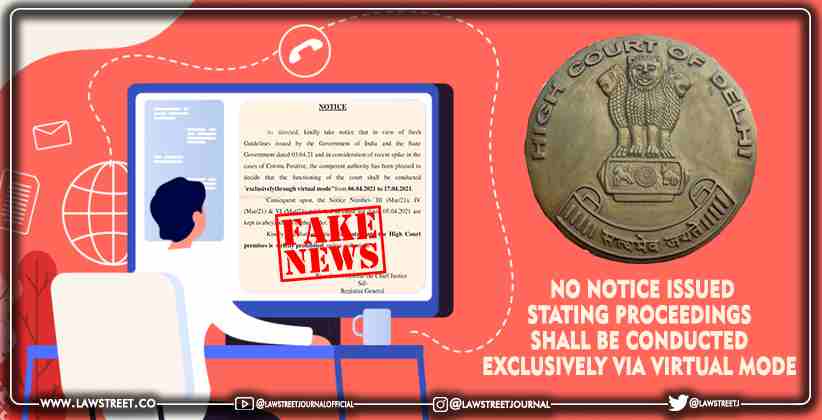 Legal Insiders Apr 07, 2021 Athira Nair ( Editor: Ekta Joshi ) 9 Shares
9 Shares
The Delhi High Court on Tuesday ( April 7, 2021) clarified that no notice has been issued by the court stating that complete functioning of the court will be conducted exclusively via online platforms till April 17, 2021 in the view of recent surge in Covid-19 cases.

The clarification came in wake of a notice which was being circulated on social media on various platforms claiming that court will exclusively start hearing the matters via virtual mode. The given notice was originally issued by Patna High Court. This confusion was cleared after Manoj Kumar Jain, Registrar General of the Delhi High Court clarified that the notice being circulated is a rumor and no such statement has been issued by the Delhi High Court.

The Delhi High Court started physical hearings from 15th March. The Administrative and General supervision Committee of the Delhi Court later resolved to permit hybrid meetings in court where a similar request is made by the counsel of parties. The notice issued by Delhi High Court on 19th March 2021, stated:

“Hon’ble Administrative and General Supervision Committee in its meeting held on 19.3.2021 has been pleased to resolve that henceforth this Court shall permit hybrid/video conference hearing where a request is made by any of the parties and/or their counsel.”

In the light of this, guidelines were also issued by the Delhi High Court vide order dated 12th March 2021, to the administration, to monitor the situation carefully and take relevant and appropriate steps when physical hearing is resumed in the High Court and the Courts under it, with effect from March 15th onwards. The same order also stated that the hearing through video conference, on or from March, would be the exception and not the norm which is to be practiced on the daily, and if allowed the hearing would be entirely at the risk of the party requesting the same.