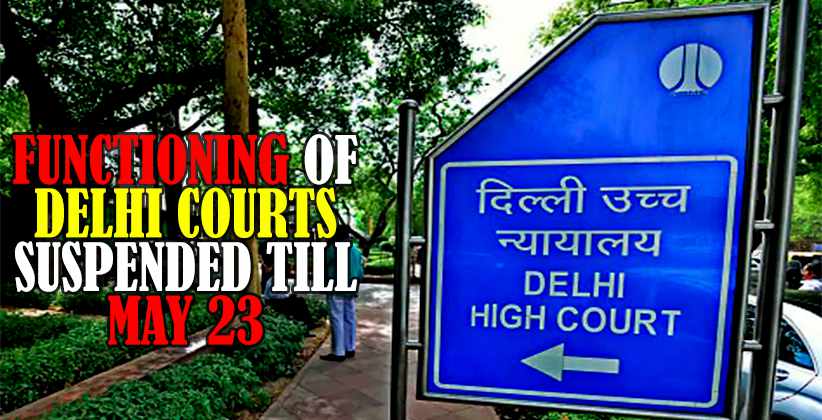 Due to the spread of the COVID-19 pandemic in India, several places have become ‘Hotspots’ of the virus. Delhi is one of the regions affected by it the most. With 8895 cases, it is fourth among all states in terms of volume of cases. There are 80 containment zones with the virus spreading at a ravaging rate in the 11 districts constituting NCT of Delhi.

With the high rate of infections prevailing in the region, the High Court of Delhi decided not to open the courts and put the lives of people at risk. This decision was taken by the Administrative and General Supervision committee headed by Chief Justice D N Patel. The matters which were scheduled for these dates have been adjourned en bloc, and information regarding them will be updated on the websites of the district courts.

In addition to this, the committee allowed the subordinate courts to take up only urgent matters related to bail, stay/injunction. The court directed that hearings for all matters would take place on an online platform through videoconferencing. The counsels from both sides would need to send brief written submissions through email for which the courts have an independent e-mail ID. It was emphasized that the subordinate courts pass no adverse orders without the performance of due process i.e. without hearings through video-conferencing or written submissions from the concerned parties.

Previously there were two division benches and six single benches hearing matters through videoconferencing. Now the number of single benches has been increased to ten. The committee also ordered that the cases in which final arguments are ready should be taken up with preference to cases that have been pending for over ten years and in which the accused is in judicial custody.

The restriction on courts started on 25th March when the functioning of courts was restricted until 14th April. It was extended to 3rd May and then 17th May following the phases of the lockdown announced by the government. The circular also ordered the formation of a roster to ensure that all necessary precautions are being taken towards maintaining social distancing.