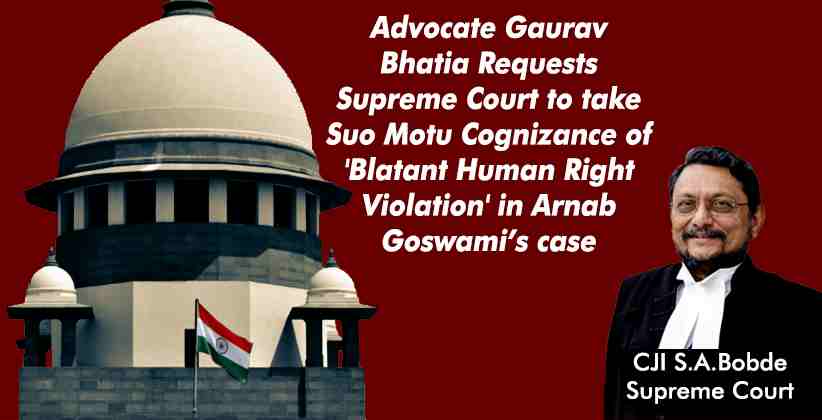 He also accused the Maharashtra Government and the Mumbai Police of acting in a malicious, arbitrary, and unconstitutional manner from the beginning.

Gaurav Bhatia has said that citizens of the country are watching and the arrest of a reputed journalist Arnab Goswami who is also the Managing Director and Editor-in-Chief of Republic Media Network is a direct assault on the media. Media is called the fourth pillar of democracy and if the media person or a reputed journalist is being assaulted or prosecuted in an unhealthy and arbitrary manner then it is shameful.

Republic media and Arnab Goswami are being targeted and vilified for the performance of their duties as media persons. They are being penalized for asking tough questions to the Maharashtra Government in cases like the brutal murders of priests in Palghar, Maharashtra, and Sushant Singh Rajput case, and others.

He also said that "This Court has always been the last resort for every citizen of this country for the protection of his fundamental right and with this living hope I write this letter."

He also pointed out that Arnab Goswami was abruptly shifted on November, 8,2020 from Alibaug jail Quarantine Centre to Taloja jail in jail with a window covered with a black screen, and this jail is filled with hard core criminals and dons of Mumbai and Maharashtra. There has been a great threat to the life of Arnab Goswami as he was heard shouting that his life is at stake and he has been assaulted by the police.

Gaurav Bhatia has said in the letter that "The fact that he faces a serious and imminent threat to his life has compelled me to write this letter to your Lordship. A valuable human life cannot be in danger due to the procedural norms and thus I beseech your Lordship to intervene and ensure that life and liberty of a citizen are protected."

The Supreme Court in a number of judgments laid down the law that a person in judicial custody or in police custody should not be subject to torture or third degree. In Sunil Batra (II) v. Delhi Administration (AIR 1980 SC 1579) Justice Krishna Iyer said that "Of course new legislation is the best solution but when lawmakers take for too long for the social patient to suffer, as in this very case of prison reform, quotes have to make do with interpretation and car on wood and script on stone ready at hand and not waited for marble architecture."

Even a similar letter has been addressed to Chief Justice of India S A Bodbe to takes Suo Moto cognizance in the case by Senior employee of Republic Media Network Pradeep Bhandari.