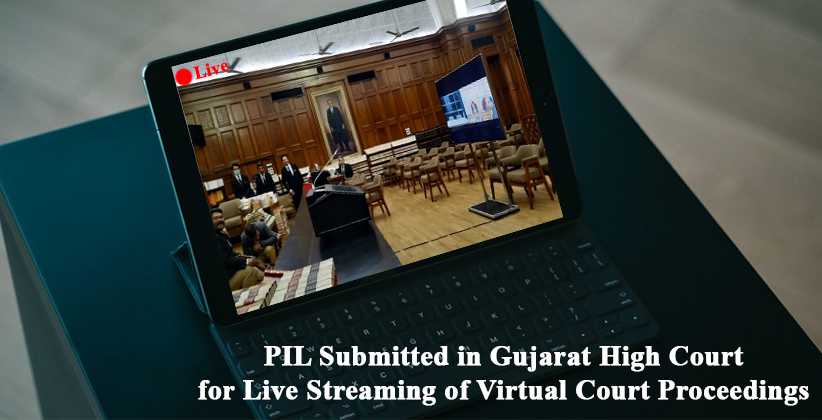 A Public Interest Litigation has been filed before the Gujarat High Court on Monday, 29th June 2020, seeking open- public access to Courts by allowing online live streaming of virtual court hearings. The Petition has been filed by a third-year law student of Nirma University of Gujarat namely Pruthvirajsinh Zala stating that the current system of virtual hearings where a video link of proceedings was shared only to advocates and only advocates and the respected judge had access to the proceedings, is ‘inaccessible’ to the public at large including litigants, media personnel, law students, etc.

The petitioner states, “Even in normal parlance, physical hearings out to be made more accessible by setting-up live- streaming mechanism, in terms of Section 327 of CrPC and Section 153- B of CPC, that relate to open trials and access to the public during the hearing of cases before the Court.” The plea states, “The right of access to justice flows from Article 21 of the Constitution. The concept of Justice at the doorstep would be meaningful only if the public gets access to the proceedings as it would unfold before the Courts and in particular, the opportunity to witness live proceedings in respect of matters having an impact on the public at large or on a section of people,”

The PIL was submitted in light of several precedents including Swapnil Tripathi v. Supreme Court of India, 2018 in which the Court permitted the live hearing making a remark that ‘Sunlight is the best disinfectant’. The Court stated, “By providing ‘virtual’ access of live court proceedings to one and all, it will effectuate the right of access to justice or right to open justice and public trial, right to know the developments of law and including the right of justice at the doorstep of the litigants. Open justice, after all, can be more than just physical access to the courtroom rather, it is doable even ‘virtually’ in the form of live streaming of court proceedings and has the same effect.”

As of now, the High Court of Kerala is the single High Court in India to which has successfully started live-streaming of Court hearings through the Zoom App. Following the same steps, a single bench of Bombay High Court has also held open- for- public video- conferencing hearing on 9th April 2020. Calcutta High Court also agreed to live to stream the hearing and proceedings of a matter pertaining to entry of children born to Parsi women and non- Parsi men into a fire temple which is a Zoroastrian place of worship in the city. However, the date for the final hearing has not yet been decided. The petitioner has prayed Gujarat High Court to frame guidelines or regulations to administer live streaming of Court Proceedings.

The Supreme Court recently stated that the matter related to the implementation of its 2018 verdict allowing live streaming of court proceedings of cases of constitutional and national importance has to be dealt with by the Chief Justice of India on the administrative side.