'House Privileges Not Applicable to Activities Other Than Legislative Functions' : Salve Submits on behalf of Facebook VP in the SC 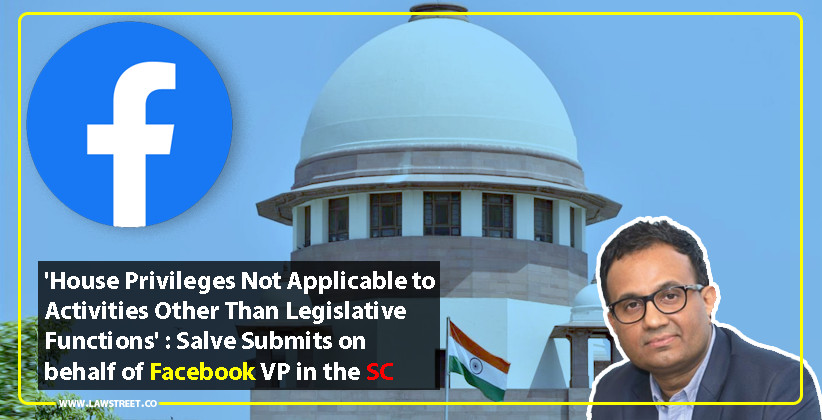 The Supreme Court on Wednesday, 27th January 2021 heard Facebook India Vice President, Ajit Mohan's challenge to the two summons issued by the Delhi Legislative Assembly's Committee Peace and Harmony asking him to appear to look into the role of fake news behind the Delhi riots of February 2020.

The two summons were issued in September 2020 demanding Mr. Mohan to appear before the committee for testifying on the role or complicity of Facebook officials in Delhi riots. On September 23, 2020 the Court had recorded the submission made on behalf of the Chairman of the Assembly Panel that no coercive action will be taken against the Ajit Mohan for failing to appear.

Salve, in the hearing before the same bench last week, submitted that internet intermediaries including Facebook can only be controlled by the Central Government and not the Legislative Assembly.

He also submitted that Delhi Legislative Assembly's Committee on Peace and Harmony, under the realm of privileges of the House, cannot summon third persons or compel appearances of non members. The Supreme Court while dealing with a similar proposition observed that  Parliamentary Privileges are those fundamental rights which the House and its Members possess so as to enable them to carry out their functions effectively and efficiently. These are not powers to bully people to appear before the Committee.

The bench will continue hearing the matter on 28th January, 2021.