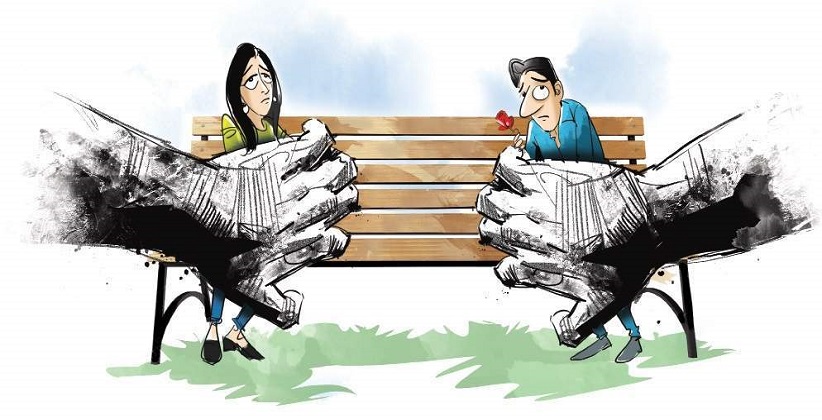 As the valentine's day approached this year, we could witness a sudden wave of patriotism amongst some of the radical groups in our country.

The members of the Bharat Sena and Shakti Sena, who identify themselves as Hindu groups have stepped onto the streets to protest against the day by burning and tearing cards in public. Even the university varsities have taken upon themselves to be the moral police on valentine's day by ordering students to stay away from campus, or otherwise, disciplinary action would be taken against them.

The rationale behind the actions of these groups, as they claim is that it is "western influence" which is causing youngsters to celebrate February 14 as valentines day. But a country which is obsessed with all things Phoren why there is sudden engagement in pretence.

When it comes to hypocrisy, these groups are born leaders. On the one hand, they will themselves indulge in all the illegal activities like when the Karni Sena destroyed the public property while protesting against the release of the movie Padmavati and then on the second hand they talk about keeping up with the good image of the Indian society.

Taking into consideration the number of growing cases of moral policing the Supreme Court in the case of S. Khushboo v. Kanniammal & Anr, has observed that "Notions of social morality are inherently subjective and the criminal law cannot be used as a means to unduly interfere with the domain of personal autonomy."

In 2014 in a landmark case of Aveek Sarkar & Anr v. State of West Bengal and Anr, the Supreme Court has granted a significant relief to the couples by laying down a "community standard" test according to which "only those sex-related materials which have a tendency of 'exciting lustful thoughts' can be held to be obscene, but the obscenity has to be judged from the point of view of an average person, by applying contemporary community standards." Thus, hugging and holding hands in public cannot be held as an offence and no action could be taken against the couples.

Its high time that we expand our thinking and also spread mindfulness among the majority because we cannot talk about progress when our minds are still stuck in the regressive deportment.

Let us know about your thoughts on the subject by dropping a comment below.

Two-Child Policy Norm: A Stumbling Block for the better future