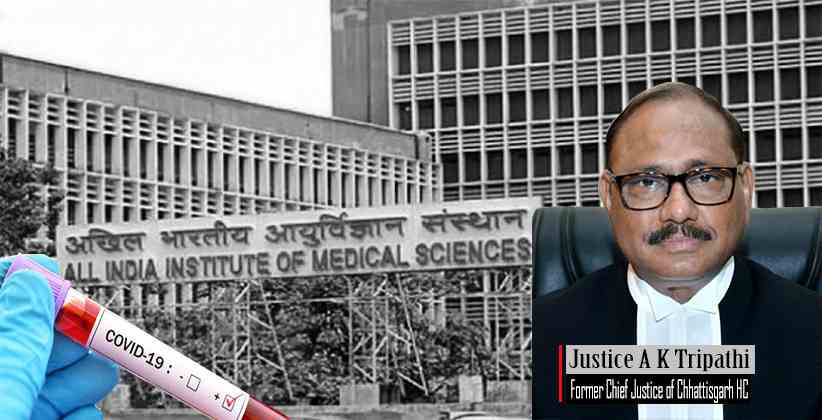 Justice Ajay Kumar Tripathi, who tested positive for coronavirus last month, breathed his last on Saturday, 2nd May 2020 at 8:30 pm, after suffering a cardiac arrest at the All India Institute for Medical Sciences (AIIMS) Jai Prakash Narayan Apex Trauma Centre.

After being tested positive for coronavirus, Justice Tripathi who was a Lokpal Judicial Member and the former Chief Justice of Chhattisgarh High Court, was kept in the Intensive Care Unit (ICU). He was on ventilator support for more than a fortnight but unfortunately could not be revived.

Justice Tripathi was admitted to the AIIMS after he was tested positive for the coronavirus on 2nd April 2020. He was admitted to the trauma center (predominantly used to provide) treatment to patients of road accidents) that was recently converted into a dedicated COVID-19 hospital in the wake of the coronavirus. He was reportedly the first patient to have been shifted to the facility.

Aged 62, Justice A K Tripathi was one of the four judicial members of the Anti-corruption Ombudsman, Lokpal. He was appointed as the judicial member of the Lokpal on 23rd March 2019.

(A Lokpal is an anti-corruption body or authority which represents the general public interest in the Republic of India. The selection of Chairpersons and Members of Lokpal is through a selection committee consisting of Prime Minister of India Narendra Modi, Speaker of Lok Sabha Om Birla, leader of opposition in Lok Sabha, Chief Justice of India Sharad Arvind Bobde or a sitting Judge of Supreme Court, appointed by CJI.

The Lokpal and Lokayuktas Act was passed in 2013 with amendments in Parliament, following the Jan Lokpal movement led by Anna Hazare in 2011. The Lokpal is responsible for enquiring into corruption charges at the national level, as it has jurisdiction over the central government, while the Lokayukta performs the same function at the state level. Retired Justice TP Sharma is the current Lokayukta of Chhattisgarh. He replaced retired Chief Lokayukta Justice S N Shrivastav on 21st August 2018.)

Justice A K Tripathi also served as the former Chief Justice of Chhattisgarh High Court. He was appointed on 7th July 2018 and served till 22nd March 2018 before being elected as a judicial member of Lokpal.

He was preceded by Justice Thottathil B. Radhakrishnan, who is the current Chief Justice of Calcutta High Court and served Chhattisgarh High Court from 18th March 2017 till 6th July 2017.

Justice Tripathi was succeeded by Justice PR Ramachandra Menon as 13th Chief Justice of Chhattisgarh High Court. He was a former judge of the Kerala High Court.