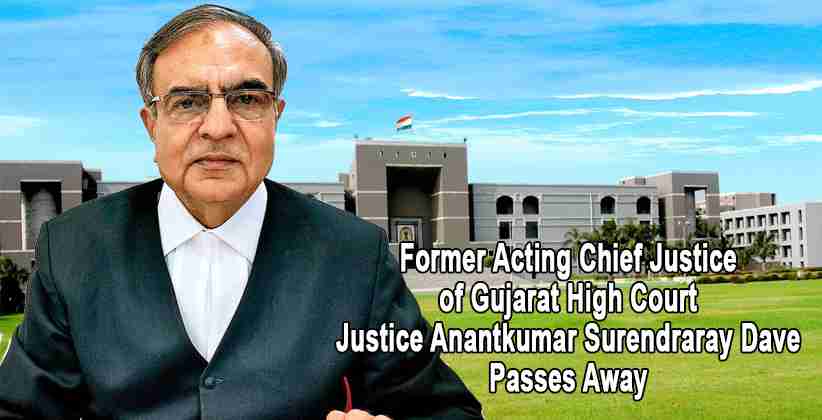 Justice Anantkumar Surendraray Dave, a former Judge and Acting Chief Justice of the Gujarat High Court passed away after prolonged illness at the age of 62.

Prior to his retirement, Justice Anant Dave had served as an Acting Chief Justice of the Gujarat High Court before the current Chief Justice Vikram Nath took over.

Born in December 1957, he enrolled as a lawyer in 1984. During his years of legal practice, he has served as a standing counsel for the Union Government and as an Additional Government Pleader for the State Government.

He has also served as a Solicitor at the Gujarat High Court, as a Legal Advisor for the Consumer Education and Research Centre, the Sardar Sarovar Nigam Ltd, BSNL, GE Board, GSIC, and the Panel of Gujarat High Court Legal Aid Services.

Justice Dave was appointed as a High Court Judge in 2004. His post was made permanent in 2006. Among the notable cases, he dealt with was the Sabarmati Express/ Godhra train burning case. A Bench headed by Justice Dave commuted the death penalty for 11 of the convicts to a penalty of life imprisonment. The life sentences given to 20 others were also upheld by this Bench. In December 1984, Dave enrolled as an advocate with the Bar Council of Gujarat.

In November 2018, Dave was appointed as the acting Chief Justice of the Gujarat High Court after Justice Akil Kureshi, who was expected to assume the office of Chief Justice on the basis of seniority, was transferred to Bombay High Court. Dave's tenure continued till October 2019, when Chief Justice Vikram Nath of Allahabad High Court took over.

One of his landmark judgments includes that of October 2017, where Justice Dave was part of a division bench with Justice GR Udhwani that commuted the death sentence of 11 convicts of the 2002 Sabarmati train burning incident to rigorous life imprisonment, upholding the life-sentence of 20 others. The division bench also directed the Gujarat government to pay compensation to the kin of the deceased kar sevaks on the train, saying it failed to discharge its duty in maintaining law and order.

Justice Dave also presided over several high profile land acquisition matters, including that of GIFT City in Gandhinagar as well as the Ahmedabad-Mumbai bullet train. In around 20 years he served as an advocate, Justice Dave represented the state government as an assistant government pleader and the Union Government in the Gujarat High Court as a standing counsel for the Central Government.

He was also a legal advisor for Consumer Education and Research Centre (CERC) in the early days as well as to Sardar Sarovar Narmada Nigam Ltd (SSNNL) and BSNL and was also on the panel of Gujarat High Court Legal Aid Services.

In October 2004, he was elevated as an additional judge of the Gujarat High Court and confirmed as a permanent judge in September 2006. He was part of the Bench for 15 years and helmed the High Court as acting Chief Justice from November 2018 to September 2019. He continued as a Judge for three more months, before retirement in December 2019.

As an acting Chief Justice, Justice Dave implemented the long-pending demand of the Bar for the renovation of the barroom and allocating chambers to junior advocates.