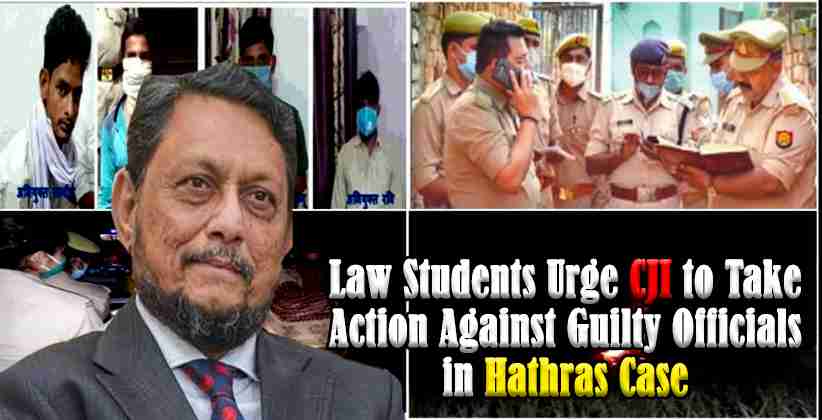 The future of the legal fraternity of India wrote to the Chief Justice of India to issue directions for taking actions against guilty officials involved in the Hathras Rape Case and the ensuing 2:30 A.M cremation of the victim. 510 law students have urged to CJI by writing letters to him. The students have prayed to the court to direct the conduction of an inquiry by the Uttar Pradesh Police, Hathras Police, and Hathras District Administration by a special investigation team, headed by a retired apex court judge.

The students stated that the 19-year old victim departed but she gave a dying statement telling the officials about rape and also how her body was treated by the accused and despite this, the police officials deprived the victims family to say a final goodbye to the victim and restrained them by giving them illegal house arrest.

By this, they also said that the stats of the rape are continuously increasing and it has become so common for this crime to take place that we only talk about few selected cases which shake our conscience and fill fear in us. They said that criminal law in India has given certain procedures and protocols which the officials have to follow and the police authority is liable for questioning their act if they fail to do so and seeing the incident of September 30th, 2020 where the officials burned the body at the middle of the field without the parental consent, they should be questioned.

They said that the victim's right to life with dignity which also includes the right to decent cremation was taken away by the officials. They said that even a convicted terrorist like Amal Kasab was given a decent cremation whereas in this case the victim was deprived of it. The student also cited the case of Parmanand Katra, Advocate v. Union of India (1995) 3 SCC 248. They also said that the present Nirbhaya Fund should be used for ensuring the safety of women as to discuss the proper guidelines and also regarding the right of the family on the dead body and right to decent cremation.