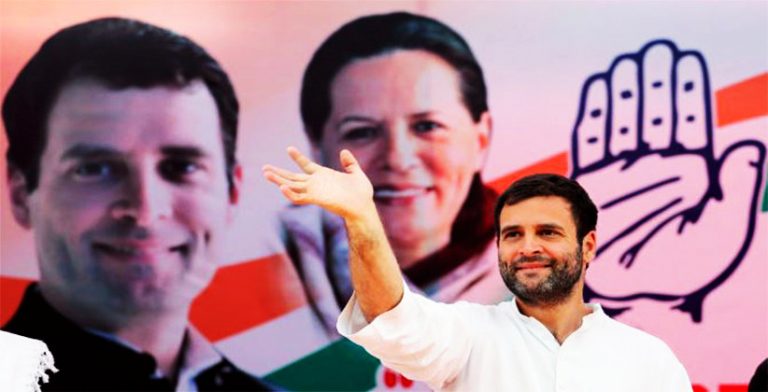 The Indian National Congress on April 2, 2019, released its Manifesto for the upcoming Lok Sabha Elections.

The Manifesto contains significant legal reforms that the party envisages to bring.

Read all the legal reforms below.

The Congress promises to introduce a Bill to amend the Constitution to make the Supreme Court a Constitutional Court that will hear and decide cases involving the interpretation of the Constitution and other cases of legal significance or national importance.

In that regard, Congress aims to establish a Court of Appeal between the High Courts and the Supreme Court, to hear appeals from judgments and orders of High Courts. The Court of Appeal will sit in multiple Benches of 3 judges each in 6 locations.

Further, the Congress calls for a National Judicial Commission (NJC) to appoint judges to the higher judiciary. As per the Manifesto,

“the NJC will be comprised of judges, jurists and parliamentarians and will be serviced by a secretariat. Names of suitable candidates will be placed in the public domain and the reasons for selection will be published to ensure that the entire process is transparent.”

Other judicial reforms include:

Other changes in laws include:

Media and Freedom of The Media

To correct the abuse of media freedom, the Congress aims to amend the Press Council of India Act, 1978, to strengthen the system of self-regulation, protect the freedom of journalists, uphold editorial independence and guard against government interference.

Other reforms called for:-

The Congress promises to pass the Constitution (Amendment) Bill to provide for reservation of 33 per cent of seats in the Lok Sabha, State Legislative Assemblies and Rajya Sabha for women.

“We will review all laws that stipulate wage rates to provide that men and women are paid the same wage for similar work,” the Manifesto states.

Congress promises to pass a new law in the first session of the 17th Lok Sabha and in the Rajya Sabha to prevent and punish hate crimes such as mob-engineered stripping, burning and lynching. The law will contain provisions to compensate the victims and to hold accountable the police and district administration for proven negligence.

Also, The Waqf Properties (Eviction of Unauthorized Occupants) Bill, 2014 will be re-introduced and passed. Waqf properties will be restored to the legal trustees.

Healthcare - Congress promises to enact the Right to Healthcare Act that will guarantee to every citizen the right to healthcare services, including free diagnostics, out-patient care, medicines and hospitalisation through a network of public hospitals and enlisted private hospitals.

Digital Rights of Every Citizen - To protect the personal data of all persons and uphold the right to privacy;

Education - Congress will pass a Students Rights Bill to codify the rights and obligations of students in colleges and universities.

Rights Of LGBTQIA+ - To immediately withdraw the Transgender Bill, 2018, pending in Parliament. Instead, Congress will introduce a Bill that will be consistent with the judgment in the NALSA case. The new Bill will be drafted in consultation with the LGBTQIA+ community.

Jammu & Kashmir - The Armed Forces (Special Powers) Act and the Disturbed Areas Act in J&K will be reviewed. Suitable changes will be made in the text of the laws to balance the requirements of security and the protection of human rights.

Jobs - Congress promises regulatory forbearance for Micro and Small Enterprises. They will be exempt from all applicable laws and regulations (except the Minimum Wages Act and tax laws) for a period of 3 years from 1 April 2019 or, in the case of new businesses, the date of commencement of business. This means freedom from ‘Inspector Raj’ until they stabilise.

Rural Development - Congress promises to enhance infrastructure in rural areas and improve the quality of public goods such as roads, bridges, water supply, sanitation, electricity and schools. For this purpose Right to Homestead Act will be passed to provide a homestead for every household that does not own a home or own land on which a house may be built.

Informal and Unorganised Sector - Congress promises a fair deal for the crores of workers and the self-employed who toil every day in the unorganised and informal sector. The Street Vendors (Protection of Livelihood and Regulation of Street Vending) Act, 2014 will be implemented in letter and spirit.

Congress aims to repeal the Agricultural Produce Market Committees Act and make trade in agricultural produce—including exports and inter-state trade—free from all restrictions.

Congress promises that the distortions that have crept into the text and the implementation of the Land Acquisition, Rehabilitation and Resettlement Act, 2013 and the Forest Rights Act, 2006 will be removed and the original purposes of the Acts restored and enforced.

The Essential Commodities Act, 1955 belongs to the age of controls. Congress promises to replace the Act by an enabling law that can be invoked only in the case of emergencies.

Congress promises to amend the Anti-Defection Law to provide for instant disqualification of a Member of Parliament or a Member of the State Legislature for proven disobedience to the party’s whip or for withdrawing allegiance to the party or for supporting another party.

The Party aims to introduce the requirement of public consultation before a Bill is introduced in Parliament.

A Social Accountability Act will also be enacted to ensure all government schemes and programmes shall be subjected to social audit.

The Aadhaar Act, 2016, will be amended in order to restrict the use of Aadhaar to subsidies, benefits and services provided by the government as was originally intended under the law. Congress also promises that, having regard to the inherent limitations of biometric identification, alternate instruments of identification will be allowed under the law.

Congress proposes to review the Right to Information Act, 2005 in the light of its working in the last 14 years and omit provisions that may have diluted the Act and add provisions to strengthen the Act.

Congress promises to pass an Anti-Discrimination Law to prohibit discrimination on the basis of religion, caste, gender or language in the supply of goods and services that are made available to the public in general such as housing, hostels, hotels, clubs, etc. The party will also re-introduce and pass the Grievance Redressal Bill, 2011 to provide for mandatory, time-bound grievance redressal.