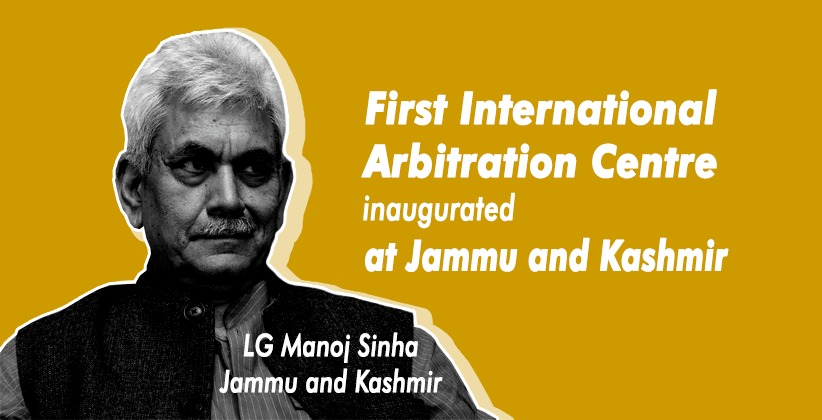 In the presence of the Jammu and Kashmir High Court Chief Justice Gita Mittal, Judge of the High Court, and members of the arbitration committee, the center was inaugurated at the Sher-i-Kashmir International Conference Center, Srinagar.

The Lieutenant Governor said that globalization has reduced the relevance of borders in trade and investments, but they need to follow international practices to maximize the benefits. Arbitration, as a mode of Alternate Dispute Resolution, gives flexibility, choice, and confidence to investors. He also added that companies in India prefer arbitration for the resolution of disputes.

The Ease of Doing Business Index ranking also improves if there is good arbitration. He also said that arbitration was important as it suits foreign investors and traders who do not have enough knowledge about domestic laws and would like their disputes to be confidential and resolved faster.

LG Sinha on the occasion of inauguration said that the setting up of the Centre is in line with requirements of modern-day borderless trade, business, and investment and also added that it will do away with investor apprehensions.

“I believe that Arbitration which provides an alternative mode of dispute resolution and also reduces pending cases across the judiciary, should make investors feel at home”, said LG Sinha.

This center is the first arbitration center of the newly formed Union Territory of Jammu and Kashmir. Its aim is to achieve the object behind Section 89 Civil Procedure Code, to save time and ensure that arbitration proceedings remain inexpensive.

In October 2016, the first-ever International Arbitration Center in India was set up by the Maharashtra government in the city of Mumbai. Also, court-annexed Arbitration Centres are successfully functioning at Delhi, Chandigarh, Bangalore, Chennai (Madras), and Cuttack (Orrisa).

The Lt Governor said that the government is working tirelessly to bring big industries in Jammu and Kashmir. This can lead to a revival in the economy of the region.

The Lt Governor said that the setting up of the Centre will only boost our effort as this will do away with Investor apprehensions while considering an investment. It would also help reinforce the investors’ trust in the region.